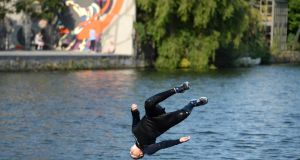 They were commenting as video footage from Dublin city centre showed some young people using the good weather on Tuesday afternoon to jump off bridges into the River Liffey.

The footage showed several people jumping off the Samuel Beckett Bridge into the Liffey.

“Dublin Fire Brigade would advise caution in this hot weather; always take care around water, even if it’s slow-moving and shallow,” she said.

She said the Dublin Fire Brigade saw a surge in river-rescue incidents during warm weather.

So far this year, the Dublin fire service has been called out to 96 water-related incidents.

“Do not swim in unsafe areas such as canals, especially locks where there are hidden dangers. Remember, alcohol impairs judgment, balance and co-ordination, all essential for swimming,” the spokeswoman said.

John Leech, chief executive of Irish Water Safety, said people needed to take precautions around the water, and should not take risks just because of the good weather this week.

“Irish Water Safety is advising anyone planning to visit the beach, swimming pool, lakes [and] rivers during the current good weather to take precautions,” he said.

Alcohol is involved in 30 per cent of drownings, Mr Leech said, adding that people should “stay away from the water” if they have had a drink.

“Children should be supervised near water at all times and swimmers should remain within their depth while in the water. People should only swim in traditional bathing areas,” he said.

Met Éireann has issued a high temperature weather warning for Dublin and surrounding counties for Wednesday, when temperatures are expected to hit 28 degrees Celsius.

The warning is the first high temperature weather warning of the year.

A Met Éireann representative said the weather warning is triggered when temperatures are due to reach 27 degrees, which would happen a number of times each June or July.

Counties Dublin, Carlow, Kildare, Wicklow and Meath will see the hottest weather on Wednesday. On Tuesday, temperatures varied between 19 and 26 degrees.