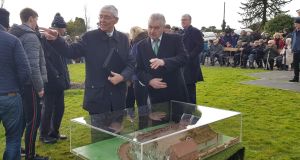 Former Fine Gael leader Alan Dukes (left): ‘I believe that armed conflict between Ireland and England was probably inevitable at some point’

The War of Independence was probably inevitable given the historic failure of British political understanding to appreciate Ireland’s unwillingness to be a subject nation, according to former Fine Gael leader, Alan Dukes.

Mr Dukes said that the War of Independence was but the latest in a centuries-long series of actions aimed at ending British political and economic domination in Ireland. It began 100 years ago last month when IRA volunteers attacked a party of RIC at Soloheadbeg in Co Tipperary.

“It was probably inevitable that an armed conflict would eventuate, despite the enormous disparity between the opposing forces - to put it simply, the Irish would never be reconciled to subjection; the British could not understand why any part of the Union or the Empire would wish to leave.”

Speaking at a commemoration to mark the 98th anniversary of the Clonmult Ambush in Co Cork – where 12 IRA Volunteers were killed by British forces on February 20th, 1921, and a further two were executed – Mr Dukes said Ireland ultimately owed its freedom and independence to those who took up arms.

“As a former politician, I have to admit that I am always uneasy and uncomfortable in discussing armed conflict and in seeming, however reluctantly, to justify it - ideally it should be the very last resort,” he told the 300-strong attendance at the remote ambush site 15km north of Midleton in East Cork.

“As I have said, I believe that armed conflict between Ireland and England was probably inevitable at some point. The reason, I believe, is to be found in a failure of British political understanding over centuries and, more particularly, after the Act of Union in 1800.”

Mr Dukes’s comments contrast with those of former taoiseach John Bruton, his successor as Fine Gael leader, who has argued Home Rule could have led to an independent Ireland and that neither the Easter Rising of 1916 nor the War of Independence were justified.

But speaking at Clonmult, the scene of the single greatest loss of IRA Volunteers in a single incident in the War of Independence, Mr Dukes sought to highlight the personal and complex tragedy that ensued from the incident, which in turn led to the execution of six suspected spies by the IRA.

“It is probably fair to say that while all of those involved in the ambush recognised the risks inherent in their actions, each was doing what he considered was his duty as laid down by those whose authority he accepted, whether as a volunteer or an agent.

“Some 20 families were left to mourn their dead; others were left to spend years facing bitterness and suspicion - whether merited or not - among neighbours and relations,” said Mr Dukes who revealed how he had recently learned of his own close family link with Clonmult.

He explained that after the ambush, a number of local people went to the ambush site to clean and lay out the bodies of the dead, and among those to do so was his great-aunt Lena Allen who lived in the nearby townland of Ballydonaghmore and taught in Dungourney National School.

Mr Dukes said that learning about his great-aunt’s connection with Clonmult set him thinking about his own complex family ties to both sides of the conflict as his grandfather, Ms Allen’s brother-in-law, was English and had served with the British army, surviving the horrors of Gallipoli.

His other grandfather was a Dublin Metropolitan Police constable and later a member of An Garda Síochána, some members of his wife’s family worked on the railways and secretly carried weapons for the IRA during the War of Independence, and he had in-laws who were interned in Frongoch.

“I’ve no doubt there are similar threads of conflicting associations overcome by human affections in family histories all over Ireland - they are among the many powerful influences that have helped shaped Anglo-Irish relations over the course of the century since the fatal events we commemorate here today.

“We will remember even more such conflicting associations when we come to consider and commemorate the events of the Civil War that followed the Treaty of December 1921,” said Mr Dukes at the commemoration, which was attended by several local politicians including Minister of State David Stanton.