The local community of Blackrock, Co. Louth come together to hold a vigil for Capt Mark Duffy, who has been missing since the crash of the Coast Guard's Rescue 116 helicopter. Video: Ronan McGreevy 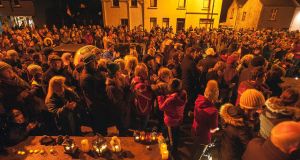 The people of Blackrock, Co Louth, turned out in their hundreds on Friday night to remember Capt Mark Duffy, who has been missing since the Rescue 116 helicopter crashed into the sea off Co Mayo.

After a St Patrick’s Day of rain and heavy winds, a timely calm accompanied the candlelit vigil at the Sundial, the beautiful circular monument built for the Millennium, which dominates the village’s seafront.

The image of a female diver which forms the centrepiece of the monument was surrounded by spring daffodils and by the inscription carved in stone “Ag tuile is ag trá a chaitheann an fharraige an lá (The sea spends its day flowing and ebbing)”.

The candles in the wind were concealed in lanterns, illuminating the faces of young and old who surrounded the monument and spilled out on to the town’s main street.

Parish priest Fr Pádraig Keenan spoke of circles of family and friends surrounding the Duffy family. In front of him, on a wooden bench, candles were placed, one each for Capt Duffy, Capt Dara Fitzpatrick and winchmen Paul Ormsby and Ciarán Smith, all lost after their Sikorsky helicopter disappeared in the early hours of Tuesday off the Co Mayo coast. A candle was also lit for the wider Duffy family circle.

Fr Duffy spoke of the family “being in the unknown” as they await news of the missing crew. The candles, he hoped, would represent some solace in the symbolism of light dispelling the darkness.

The local coast guard formed a guard of honour as Mr Duffy’s wife, Hermione, and two children walked around the circle acknowledging all those who had come to the vigil.

The Lord’s Prayer was said and two local musicians played a quiet lament. The vigil ended with a ripple of applause.

James Larkin, the officer in charge of the Coast Guard unit in Greenore, Co Louth, spoke of Capt Duffy as a “gentleman”. “He lived for the Coast Guard, he lived for his family. He has a young daughter and young son,” he said.

“When he wasn’t working, he would often come up to us when we were out on training or exercise.”

Those involved in rescue missions know the risks involved, but these tragedies still have the power to shock.

“Devastation is the one word that would sum it up. There is a feeling of numbness all round. The sentiments are echoed all around the country. You can see it in the press and the letters of support. People don’t expect these things to happen.” said Mr Larkin.

He recalled that the helicopter that crashed had assisted them in two rescues over the weekend, one for a walker who had got into trouble on Saturday night and, on Sunday, when a helicopter crashed in Carlingford.

The Rescue 116 tragedy had given them all pause for thought.

“The helicopter for us was always the comfort in the sky. When we saw it coming, we knew whatever we were involved in, the best help that could be given was there with the crew and their training and expertise.”