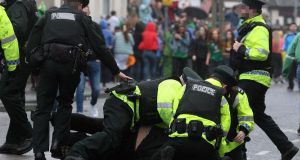 Police arrest a man in the Holyland area of Belfast during the St Patrick’s Day celebrations. Low-level disorder, alcohol-related offences and minor assaults were among what young people were arrested for. Photograph: Freddie Parkinson/Press Eye

The Police Service of Northern Ireland made at least 11 arrests on St Patrick’s Day in the Holyland area of south Belfast, a district densely populated by students.

On Friday there was a heavy police presence in the district which is full of multiple-occupancy houses, pubs and restaurants.

Low-level disorder, alcohol-related offences and minor assaults were among what young people were arrested for, a police spokeswoman said.

In previous years there have been assaults on police and other serious public disorder incidents in the Holyland, which is close to Queen’s University.

Following liaison with police this year five off-licences in the locality agreed to shut from 4pm to 9pm to reduce young people’s access to alcohol.

Over the years hundreds of students have been disciplined by the North’s universities and colleges following March 17th incidents.

Residents acknowledge there is an issue with a small number of students and that schoolchildren and adults not in education get involved in parties in the area, which can become very disruptive.

When The Irish Times visited Agincourt Avenue hundreds of intoxicated young people were on the streets and moving between parties in houses, largely occupied by university and college students.

The emergency services, including the ambulance service, assisted a number of young people in distress after consuming large quantities of alcohol.

On Friday evening South Belfast Partnership Board director and local resident of 30 years Brid Ruddy said she was relatively pleased with how March 17th unfolded this year. “It went very well,” she said.

“We are happy with the co-operation between all the partners.

“There was a certain amount of hooliganism and drunkenness but it is so much better than last year.”

Ms Ruddy was one of those to organise a spring gathering event early in the day aimed at uniting the diverse community living there.

Police, Belfast City Council staff and others were on the ground all day in an effort to minimise any disorder.

“I think we’ve seen an improvement on the conduct last year,” a senior officer said.

A university student from Co Derry who did not want to be identified said the police and media focus on the Holyland made young people want to visit the area on St Patrick’s Day.

“We’re just having fun,” she said.