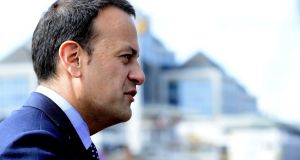 Leo Varadkar gave a press conference on the steps of Government Buildings challenging Simon Coveney and other potential candidates to a broadcast debate. Photograph: Cyril Byrne / THE IRISH TIMES

As Enda Kenny tetchily batted away questions on his leadership during a trip to Canada this week, the pretence that the contest to succeed him will await his official departure melted in the early May sun.

Leo Varadkar gave a press conference on the steps of Government Buildings challenging Simon Coveney and other potential candidates to a broadcast debate – which Fine Gael has repeatedly ruled out – and suggested that his main rival is keener to shift Kenny along promptly.

Coveney continued to meet party councillors and members, and his core leadership team – comprised of his family, strategists and ministerial supporters – fined tuned their campaign plan.

Both camps are ready for Kenny to stand aside from next week on, although it is now seen as more likely he will do so the following week.

Next week, Michel Barnier, the EU’s chief Brexit negotiator, will address a sitting of the joint Houses of the Oireachtas, as well as a meeting in Wicklow of the European People’s Party, the centre-right grouping to which Fine Gael belongs.

Aspiring Kennyologists believe he will not stand aside until after Barnier’s visit, although nobody knows for sure.

But the surest sign that political energies in Fine Gael have even moved on from guessing Kenny’s departure to the contest that will follow are the stirrings of the Coveney and Varadkar factions briefing against each other.

Both sides, naturally, maintain they have the upper hand and are set fair for victory, although the race is tight across all categories of the electoral college that will decide the new leader: the parliamentary party, councillors and rank and file membership.

The idea, however, that this purely a matter of concern for Fine Gael alone is as much of a nonsense as the Varadkar and Coveney pretending they are waiting for Kenny’s announcement to begin campaigning.

We are facing into more than a month of political gamesmanship, with numerous participants across the Dáil.

For Fine Gael, the internal three-week contest will begin once Kenny stands aside. If does so on a Wednesday, for example, the period for candidates to gather the required eight nomination signatures from TDs, senators or MEPs will last for three days, closing on the Saturday of that week.

Nothing, on a party level, will take place for one week. There will be four regional hustings, pencilled in to run across the weekend of the following week. There will be one each in Dublin, Cork, the midlands and the west, taking place on the Friday, Saturday, Sunday and Monday.

Regional voting – the number of polling stations will be in the mid-20s – will then take place over the next weekend, again on the Friday, Saturday, Sunday and Monday.

The ballot of the parliamentary party, which comprises 65 per cent of the electoral college, will take place in Leinster House on the Tuesday morning after regional voting has concluded.

All ballot boxes will be taken to a special count centre elsewhere in the city, and the count, including tallies, will be open to the media. It is then anticipated that the winner will be announced just in time for the main evening news bulletins, with a press conference hopefully broadcast live to the nation.

But that will only conclude the first act of this political play.

The Independents, the junior partners in the minority government, and Fianna Fáil, its crutch on the Opposition benches, also await a new Fine Gael leader.

Their support or abstention will be required to elect the new taoiseach in the Dáil. They will have maximum leverage to extract concessions but the Independents and Fianna Fáil so far say their demands will be minimal.

The Independent Alliance says it would not seek to re-open the Programme for Government, although individual members will try to ensure their constituency projects are progressed.

Even so, expect some political noise within Government in the period between Fine Gael choosing its leader and that person being elected taoiseach in the Dáil. The Independent Alliance is smarting from poor opinion polls and is looking for a way to remind the public of its existence.

The confidence and supply deal between Fianna Fáil and Fine Gael allows for the election of a new taoiseach and a new Cabinet, and Fianna Fáil leader Micheál Martin has always said the delivery of agreed policy is what matters.

However, Fianna Fáil too will have requests of Coveney or Varadkar if they become taoiseach. Fianna Fáil sources say they want a commitment that Opposition Bills will progress through the legislative process, rather than passed at initial stages but never fully acted upon.

The main criticism of this Dáil and Government has been its legislative lethargy and a Fianna Fáil source said it wants a “commitment to agreeing to looking at how more legislation can be seen through to committee and final stages” from the next taoiseach.

The party wants “stimulation rather than stagnation” and an agreement that legislation both the Government and Fianna Fáil agree on will be brought to final stages.

Enda Kenny will still be Taoiseach but not Fine Gael leader during this process, which he has told friends could last as long as three weeks.

That is unlikely, but this current Dáil and Government don’t do anything in a hurry.