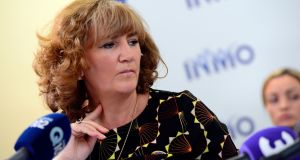 The president of the country’s largest nursing union has threatened industrial “Armageddon” if nurses aren’t given a significant pay rise and improved working conditions.

Martina Harkin-Kelly of the Irish Nursing and Midwives Organisation (INMO), told delegates at conclusion the union’s annual conference that the conditions nurses work in are “unsustainable, unacceptable and dangerous, and something will be done”.

She made the comments as Minister for Health Simon Harris looked on. The Minister had earlier pledged to implement the recent agreement between his department and the INMO to hire more than 1,200 new nurses in 2017.

During his address the Minister outlined several planned measures to increase recruitment and to lure nurses back from abroad, including offering full-time contracts to all final-year nursing students.

“The health service will be writing directly to [all graduating student nurses] in the coming days to tell them this and outline the next steps,” he told delegates.

The plan will include a range of recruitment initiatives, including recruitment trips to cities in the UK in an attempt to convince Irish nurses to return to Ireland. This will include covering relocation expenses.

However, he was non-committal on the union’s pay demands, stating only that he “agrees that pay is important, especially the restoration of your pay”.

“I know there are outstanding issues you and your members wish to discuss and I look forward to that process,” he said.

The union is seeking a non-negotiable increase in pay of between 10 and 12 per cent in the forthcoming talks between Government and public sector unions.

Although the Minister’s commitments on recruitment were warmly received by delegates, Ms Harkin-Kelly’s responding speech was uncompromising.

“Nursing and Midwifery have carried the burden of economic failures and political meandering from a professional and financial perspective – this will stop,” she said.

She said the union will co-operate in the upcoming pay talks but that if they fail, members “will do whatever we have to do, to secure the long overdue pay and conditions”.

“Parity, is now the only show in town for nurses and midwives, and is what I consider as the starting point in bridging the gap,” Ms Harkin-Kelly said.

“That infamous phrase ‘show me the money’ comes to mind, as nothing short will be required to defer an inevitable Armageddon of industrial unrest, if the Government does not recognise the true value of nurses/midwives and agree that parity of pay and hours is fair, reasonable and long overdue.”

Mr Harris earlier thanked the INMO delegates for voting in favour of the agreement at the Workplace Relations Commission (WRC) last month which avoided a strike at the last minute.

The Minister said he will ensure the agreement is implemented by the Department of Health using “a rarely used legal provision whereby the Minister of the day can issue a direction with which the HSE must comply”.

Mr Harris also said the HSE has also issued a directive that from now on recruitment will be handled by the directors of nursing in each hospital.