University teachers warn patience of staff is at an end 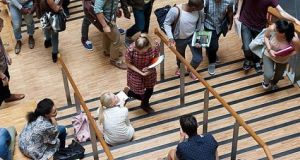 The Irish Federation of University Teachers’ conference heard staff numbers fell 4,500 in universities between 2008 and 2013, and student numbers surged more than 31,000 over the same period. Photograph: Getty Images

The patience of those working in the higher education sector is at an end after experiencing years of cutbacks, the general secretary of the Irish Federation of University Teachers has warned.

Speaking at its annual conference at the weekend, Mike Jennings said the reward for staff for 10 years of sacrifice and patience is that 72 per cent of Irish academics witnessed a decline in their working conditions between 2007 and 2014; 100 per cent suffered a fall in salary; staff numbers fell 4,500 in universities between 2008 and 2013; and student numbers surged more than 31,000 over the same period, with funding to universities falling 26 per cent.

“Mr Tom Boland, the recently retired chief executive of the Higher Education Authority, made a very good and telling point in an address to the Royal Irish Academy, when he wondered if the above outcomes had been possible because ‘there are no hospital trolleys in universities’ ,” Mr Jennings said.

“And let me tell you, delegates, that if the head of the Higher Education Authority implies that you are not militant enough, then it is time you sat up and paid attention.”

Mr Jennings said the Irish Federation of University Teachers had been seeking a meeting with Minister for Education Richard Bruton for many months, but the request had been impolitely ignored.

“So I hope no one will accuse me of megaphone diplomacy when I say from this podium today: Minister, the patience of the patriots who have kept Irish higher education afloat and expanding throughout years of unprecedented cuts is at an end.”

Mr Jennings said he would like to ask the Minster three simple questions.

“How can I congratulate myself for hiring more teachers in primary and secondary education and expect university teachers to teach 31,000 more students with 5,000 less staff?

“When I cut over €200 million from universities did I really believe that giving a paltry €36.5million in the last budget would provoke anything other than encourage derision?

Played by my rules

“What are the chances that university staff did not notice that when gardaí threatened to go on strike for one or two days my government suddenly found millions of euro to pay them more than those who had played by my rules?

“The Minister is an intelligent man. I will let him provide his own answers to these simple questions.”

He said he hoped Mr Bruton and Minister for Public Expenditure Paschal Donohoe “have the courage and the wisdom to act before the fury of the patient men and women in higher education is forced to be put on display”.

1 Coronavirus: Varadkar returns to practising medicine to help during crisis
2 Donald Trump’s clown car administration has put the fear in all of us
3 Irish doctors on getting Covid-19: ‘In 90 minutes, I deteriorated quite rapidly’
4 Dublin criminal Lawlor may have been shot dead by man who owed him money
5 Coronavirus: Plans to move 600 consultants into public system hit obstacle
Real news has value SUBSCRIBE