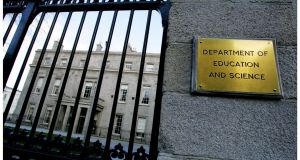 Fórsa said the Department of Education and Skills should ensure that children with special educational needs were properly supported during the coronavirus crisis. Photograph: Bryan O’Brien

The country’s largest public service union has instructed special needs assistants (SNAs) not to co-operate with any reassignment as part of the Government’s overall plans for tackling Covid-19 other than to remote support roles to assist students with special educational needs.

Fórsa said it could not accept that any SNA “should be compulsorily reassigned as a healthcare assistant – a role for which, in the vast majority of cases, they are not qualified”.

It said the instruction to members was necessary “due to the lack of clarity on what other duties may be required outside of the home, and also due to the need to ensure that SNAs can only be asked to work safely”.

The union said on Wednesday that the Department of Education and Skills should ensure that children with special educational needs were properly supported during the coronavirus crisis.

Fórsa, which represents over 9,000 special needs assistants (SNAs), said it feared “ the Department’s approach to the deployment of SNAs during the crisis risks exacerbating the educational disadvantage that children with special educational needs experience”.

The union said teachers – the largest group of staff working in schools – “have generally remained focused on providing educational supports to their students at this time”.

It added: “SNAs should similarly be deployed to support the students they normally work with –- students who, by definition, have special needs not experienced by the wider school community. Fórsa maintains this can best be done by SNAs.”

There had been suggestions from the union a couple of weeks ago that SNAs could be redeployed to work as part of the contact tracing service with the HSE.

However the union said on Wednesday that “confusion and poor communication from the Department of Education and Skills and the HSE over Garda vetting and the potential reallocation of SNAs to other roles in the HSE has spread concerns that they may be assigned to work with vulnerable elderly people”.

“These are roles that the vast majority of SNAs are neither qualified for, nor experienced in.”

It is understood that the union received a large number of representations from SNAs who were concerned that they could be moved to healthcare facilities as part of the Government’s initiative to redeploy staff across the public service as part of its fight against the coronavirus pandemic.

Separately the HSE said on Wednesday that discussions were continuing regarding moves to bring several hundred private sector medical consultants into the public system to increase capacity to deal with the Covid-19 crisis.

Many private consultants have expressed concern at what would happen to their existing patients if they signed up to the public-only contract put forward by the Government at the weekend.

The HSE declined for a second day in a row to set out how many of the 500-600 private consultants had signed the new contract .

The Irish Hospital Consultants Association has urged members not to sign the proposed contract pending clarifications being secured.

A number of informed sources have suggested that the Government may look at revising some of its proposals to deal with the continuity of care for existing patients. However no details have emerged of any such move to date.