‘It was the only way I could say my last goodbye to him,’ says bereft sibling 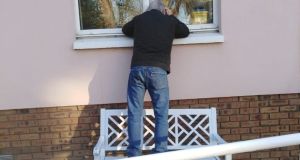 Pádraig Byrne looks through the hospital window at his brother Francis who died after contracting coronavirus. Photograph: Felicia Byrne/RTÉ Liveline

Last Wednesday Francis Byrne from Clondalkin in Dublin died in hospital after contracting coronavirus, his wife and daughter by his side to the end.

Thirty minutes after breathing his last, Francis’s brother Pádraig dragged a bench from the hospital grounds to the window where his brother’s body lay. He climbed on to it, shielded his eyes from the spring sunshine and peered into the room where Francis had died.

“That was the last time I saw him,” he said, speaking on RTÉ’s Liveline show on Wednesday. “When the visiting restrictions came in none of the family were allowed to go up and see him. His wife had been in to see him a couple of times.”

Francis was already in hospital when he started displaying coronavirus symptoms, also known as Covid-19. He had recently celebrated his 70th birthday with his family by his side, recalled Pádraig.

Two days before his death, Pádraig and another brother, Brendan, used the garden bench at St Luke’s Hospital in Rathgar to see Francis through the window. They hadn’t seen him in person in nearly four weeks.

On April 1st, Pádraig returned to the hospital to say goodbye to his brother through the windowpane. “It did comfort me, I felt I was there. It was the only way I could say my last goodbye to him. His wife and daughter were in the room, they were with him when he passed away.”

A few years ago, the six Byrne brothers carried the coffin of their seventh brother into the church. Last week the family had to bury Francis without a funeral or proper celebration of his life.

“Little did we know that when Francis passed away we were never going to carry him in.”

On the day of Francis’s burial, the hearse brought his body to his family’s home before driving slowly out of his Clondalkin estate to the applause of residents who had gathered to say goodbye to a respected member of the community.

Speaking to Joe Duffy, local resident Miriam Byrne described Francis as an amazing man. “There wasn’t a day he wasn’t watering plants or planting daffodils. He will be so sadly missed. It was one of the saddest things I ever saw to see the cortege.”

About 12 members of the Byrne family gathered near the grave as Francis was buried, said Pádraig. They were only allowed to approach the burial site once the coffin had been lowered into the ground. “There was an opening where we could see the coffin and the priest said some prayers; it was strange. It probably won’t be until we go through another funeral, it will probably hit us then.”

Pádraig described his brother as a “family man” who had “great faith” and “a passion for the environment”.

“He became involved in the residents in Floraville and continued his environmental work with them. Driving in the entrance is lovely, the daffodils and the tulips. They were there for when he was leaving.”

He called on members of the public to be “on guard” during the pandemic and not to become complacent around restrictions imposed by Government. “We’re all vulnerable but the elderly are more vulnerable and they’re our parents. We have a duty to them.”

Allowing gastropubs but not ‘wet pubs’ to reopen based on no evidence - vintners 08:09
Honour front line staff fighting Covid-19 with job security, says President Higgins 07:54
New direct ferry to Dunkirk will be valuable entry point for lorries to Europe after Brexit 07:00
School at centre of major Covid-19 outbreak unaware of case for days 06:57
Covid-19 a likely ‘catalyst’ for Dublin redevelopment 02:00