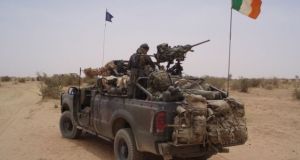 Some 350 Irish troops serving in Lebanon will have to spend an extra six weeks in the country due to the Covid-19 pandemic.

The troops were originally due home in the middle of May but this was thrown into doubt when UN Secretary General Antonio Guterres banned rotations of all UN peacekeepers until June 30th to prevent the spread of Covid-19.

Since then negotiations have been ongoing between the Irish Government and UN headquarters in New York to secure an exemption for the Irish troops on the Unifil mission in Lebanon who have been in the middle-eastern country for the last six months.

However, family members received news on Wednesday that the troops will not return until the end of June, adding another six weeks to their mission.

Defence sources suggested there is a small chance this date could be brought forward pending further negotiations.

The 350 soldiers are likely to be rotated home on two flights, one at the end of June and one at the start of July. The Defence Forces is expected to charter a flight to rotate the troops.

Once back in Ireland they will be forced to remain in quarantine for two weeks per HSE and UN guidelines. Furthermore, their replacements will be sent into quarantine in a Defence Forces training facility, most likely in the Glen of Imaal in Co Wicklow, from the middle of June until they deploy two weeks later.

Last month, Irish special forces troops were rotated home from Mali on time, despite the UN’s request for a delay. About 14 Army Ranger Wing personnel were flown home with the help of the German Air Force.

The Spanish Air force assisted in rotating another seven Irish troops from a separate mission in Mali a week previously.

Defence sources say it was much easier to rotate those missions on time due to the small numbers of troops involved.

The UN order affects about 100,000 troops around the world. Officials in New York drew up the order amid fears of a repeat of the UN mission to Haiti in 2010 when peacekeepers brought in cholera, which went on to kill some 10,000.

The Department of Defence said the Lebanon rotation will take place in two phases, known as “chalks”.

“The indications at present are that the first chalk will take place in the latter part of June and the second in early July. However, contacts with the UN in New York are continuing about the scope to possibly bring these dates forward,” it said in a statement.

“The Minister [of State of Defence Paul Kehoe] acknowledges the impact the UN decision has had on Defence Force members, as well as the anxiety that this has caused for families.”

“In recognition of these impacts, the Departments of Defence, Foreign Affairs and Trade and the Defence Forces have had extensive engagement with the UN and UNIFIL headquarters in order to ensure these rotations take place as early as possible.”

“Confirmation of the precise dates is expected very shortly and will be communicated in the first instance by the military authorities to both contingents (the contingent coming home and that going out to Lebanon).”