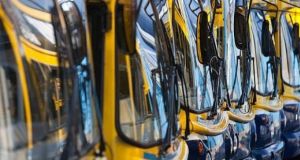 Minister for Transport Shane Ross told the Dáil the public transport system ‘is a critical part of the plan for re-opening of the economy’.

The Government will provide additional funding to ensure public transport services continue despite the drop in fare income, Minister for Transport Shane Ross has confirmed.

He also said he expected the tourism taskforce to be up and running by the end of this week.

Earlier this month it emerged the Government had been warned that State funding for running the bulk of Ireland’s public transport services could run out as early as next month.

“Therefore, I can confirm to the house that the Government will provide the necessary additional funding to continue those services, despite the drop in fare income.

“My department is working closely with the NTA (National Transport Authority) and DPER (Department of Public Expenditure and Reform) to assess and quantify this additional funding requirement.”

He was speaking in the Dáil during a debate on the impact of the Covid-19 pandemic on transport.

Following the near collapse in ferry passenger numbers, he said his department “temporarily designated five strategic maritime routes as PSO routes for a period of three months”.

“I allocated an emergency provision of up to €15million towards the costs involved in the continued operation of services on these routes.”

He also said measures have been introduced across the system to ensure the continued operation of services during the pandemic, including enhanced cleaning regimes and social distancing measures across the network.

The Minister welcomed the increased numbers of people walking and cycling, and I hope that this uptick in active travel is maintained, even as restrictions ease”.

The Minister said he had worked with EU member states and the European Commission seeking to minimise the impact of disruption to transport, and the movement of international transport workers, at borders.

“A dialogue has been initiated between the governments of Ireland, UK and France to strengthen our partnerships, share best practices and support the movement of essential goods during this crisis.”

He added that the Road Safety Authority has implemented a number of measures to support the continued functioning of the road haulage sector, including a temporary derogation from EU driving and rest hours rules.

Highlighting the importance of the maritime sector he said it accounted for 90 per cent of Ireland’s international trade in volume terms.

Mr Ross told Sinn Féin TD Darren O’Rourke that there would be estimated losses in toll income of between € 52 million and € 90 million for Transport Infrastructure Ireland. They would have to take that into account when they look at funding for the semi-state.

A number of TDs called for car tax for over 70s who had been cocooning to be partly refunded.

Fianna Fáil Clare TD Cathal Crowe said 26 employees of Clare Bus, which provided rural transport in the county, had been “constructively dismissed” by the NTA which had “played hard ball” with the company which lost its service contract.

But Mr Ross said the company did not sign the contract by the deadline set by the NTA.

Fine Gael Louth TD Fergus O’Dowd warned of the need to address the cessation of testing for roadworthiness of vehicles during the pandemic, given that 168,000 vehicles had to be re-tested last year.