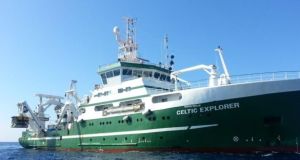 RV Celtic Voyrager, sister ship of the Celtic Explorer (pictured), will participate in the research.

An undersea hunt for evidence of first Irish settlers is under way as a team of researchers and the Marine Institute sets out to explore “the lost landscapes” of the Irish Sea.

Already evidence of Ireland’s rising sea levels towards the end of the last glacial period have been discovered on the Co Dublin coast, where a 6,000 year old forest is visible between Killiney and Bray. The ancient trees were first recorded about 100 years ago and again in 1999, but were extensively revealed after a storm in 2001 when tree stumps and fallen timber was visible on the coast north of Bray.

Now researchers from IT Sligo, with help from University College Cork and the Irish Marine Institute, have joined a University of Bradford “Lost Frontiers” programme , to explore the extensive submerged landscapes that exist between Ireland and Great Britain.

Globally, the sea level rose around 120 metres and beneath the waves of the Irish Sea lies a prehistoric palaeolandscape of plains, hills, marshlands and river valleys, in which evidence of human activity is expected to be preserved.

This landscape is similar to Doggerland, an area of the southern North Sea and currently the best-known example of a palaeolandscape in Europe. Doggerland has been extensively researched by Prof Vince Gaffney, principal investigator of the “Europe’s Lost Frontiers” Project.

Prof Gaffney said the current research into submerged lands between Ireland and Britain “are suspected to hold crucial information regarding the first settlers of Ireland and adjacent lands along the Atlantic corridor.”

The exploration will see sediment being taken from 20 sites by the Irish research vessel RV Celtic Voyager in Liverpool and Cardigan Bays. The research started on Wednesday and will continue until Sunday. The findings will be studied by an international research team.

On board the Celtic Voyager are Dr James Bonsall from the Centre for Environmental Research Innovation and Sustainability at IT Sligo, and environmental scientist Eithne Davis also from Sligo IT.

Dr Bonsall said the crew were using cutting-edge technology to retrieve the first evidence for life within landscapes that were inundated by rising sea levels thousands of years ago. “This is the first time that this range of techniques has been employed on submerged landscapes under the Irish Sea,” he said.

“Today we perceive the Irish Sea as a large body of water, a sea that separates us from Britain and mainland Europe, a sea that gives us an identity as a proud island nation. But 18,000 years ago, Ireland, Britain and Europe were part of a single landmass that gradually flooded over thousands of years, forming the islands that we know today.”

Level 5 extended until March 5th while officials consider ban on all non-essential travel into State 15:40
Anorexic woman can be tube fed against her wishes to avoid ‘potentially fatal’ outcome 15:37
Independent inquiry to examine mother and baby homes in North 15:26
Man (55) charged over theft of cash from church collection boxes 14:20
Zero-Covid strategy could ‘save the summer’, People Before Profit says 14:14