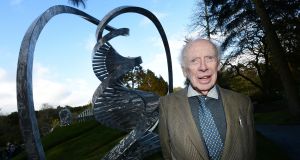 University College Cork staff have welcomed the decision by the university authorities to remove the name of American geneticist and Nobel Prize winner Dr James D Watson (90) from one of its buildings after he re-iterated racist comments on a recent documentary.

Prof Nuala Finnegan, chair of the Equality Committee at UCC, paid tribute to the UCC authorities for their prompt response in rescinding the name of the Watson Building at the Brookfield Health Sciences Complex on foot of concerns about UCC’s image in the wake of Dr Watson’s comments.

“We absolutely welcome the announcement by UCC deputy president Prof John O’Halloran that UCC has taken the decision to rescind the name of the building at the Brookfield Health Sciences Complex which had been named after Dr Watson in 2016,” said Prof Finnegan.

In the documentary, which was aired on the American public broadcaster, PBS, Dr Watson claimed there is a direct correlation between intelligence and race. “There’s a difference on the average between blacks and whites on IQ tests. I would say the difference is, it’s genetic,” he said in the documentary.

Dr Watson’s comments in the PBS documentary reflect comments he made in an interview with The Sunday Times in 2007 where he suggested that whites were more intelligent than blacks and he was “inherently gloomy about the prospect of Africa”.

Prof Finnegan had circulated a letter on January 16th in which she expressed concern that UCC might be seen as condoning Dr Watson’s racist views by allowing the building to remain named in his honour and it was signed over 1,000 staff and students.

“It is our view that the naming decision does constitute a significant impairment to the University’s reputation. Given the symbolic and practical significance of honorific processes, we would like to strongly urge the group to present a recommendation for revocation,” wrote Prof Finnegan.

Prof Finnegan went on to argue that the comments made by Dr Watson where he said that white people were genetically superior to black people, did not reflect the values that UCC stands for, namely, equality, respect, dignity and integrity.

UCC issued a statement over the weekend from deputy president, Prof John O’Halloran, in which he said that UCC rejected “the deplorable comments by Dr James D Watson, expressed on the subject of ethnicity and genetics, during the documentary, American Masters: Decoding Watson”.

According to UCC, it “acknowledges Dr Watson’s scientific contribution, in particular his research on DNA. However his most recent statements, which invalidate the apology and retraction Dr Watson made in 2007, are irreconcilable with UCC’s core values of respect, diversity and equality.”