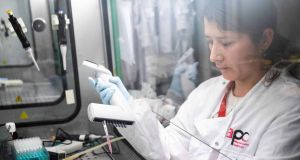 The Alimentary Pharmabiotic Centre was established in UCC some 15 years ago to carry out research on the digestive system. Photograph: Clare Keogh

A research centre at University College Cork is contributing revenues of €1. 2 million per week to the Irish economy with every euro invested by the State leading to a return of €5.60 to the economy, a new report published on Thursday has revealed.

The Alimentary Pharmabiotic Centre (APC) was established in UCC some 15 years ago to carry out research on the digestive system.

The report on the centre showed for every €1 invested in the centre by Science Foundation Ireland (SFI), the centre has attracted further €1.84 in inward investment.

APC is ranked number one globally for research in antimicrobial and therapeutic microbes and is in the top five institutions in the world for microbiome research.

Prof Fergus Shanahan, director of APC, said the centre had grown in importance since it was first established.

He said it had proved particularly valuable when the economic crash happened and scientists at the centre continued to attract investment, which has proven positive for the Irish economy.

“APC placed Ireland on the map as a global leader in microbiome science and has expanded the R&D capabilities of Ireland in an area of immediate relevance to the food and pharmaceutical sectors of industry,” he said.

Prof Shanahan said the report into the APC “Mining Microbes for Mankind - 15 years of Impact” found that APC helps to generate €1. 2 million, including expenditure and taxation impact, for the Irish economy each week.

Trinity College Dublin Prof of Finance Brian Lucey said the APC success story as an exemplary model for how SFI funding can have an impact, not just in terms of scientific and economic gain, but also social impact.

“The report underlines the importance of investing in research through national institutes of this calibre and size. In my view APC Microbiome Ireland is an economic, scientific and research success story and an endorsement of the SFI funding approach which allowed it to grow and expand.”

The report also found over the last five years some 56 collaborative projects with industry have secured over €30million in R&D funding from industry for APC research.

“Research indicates that the vast ecosystem of organisms that lives in our digestive systems might be as complex and influential as our genes in everything from cancer to obesity, and for the past 15 years, APC, has been advancing global knowledge on the understanding of our insides,” Prof Shanahan said.

The report also revealed that APC has produced over 2,500 publications in its 15-year history, which have been cited 80,873 times, equating to an average 32 citations per paper and 40 per cent of the APC publications have been from international collaborations with co-authors based in some 59 countries.

The report also said APC papers have a citation rate over twice the world average, and 25 per cent of APC publications are among the top 10 per cent most frequently cited papers globally while the centre has also developed and trained 550 alumni who occupy advanced positions in academia and industry globally.

Tánaiste Simon Coveney said the success of the centre was a “remarkable achievement’.

“I would like to congratulate APC Microbiome Ireland for its significant impact on the Irish economy and society - a €5.60 return to the economy for every €1 of State investment is a remarkable achievement, and demonstrates the importance of the Government’s policy of investing in national research centres of excellence and scale. Who would have thought that our tiny resident microbes can have such a dramatic economic and societal impact?”