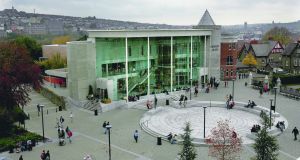 Minister for Education Richard Bruton’s order that Irish universities conduct significant reforms before getting extra State funding has been attacked by the president of University College Cork, Dr Michael Murphy.

Commenting on the latest QS World University Rankings, which saw UCC fall from 233rd position to 283rd place, Dr Murphy said the drop was inevitable as the university’s budget had been cut from €360 million in 2008 to €300 million this year.

“We lost 15 per cent of our staff since 2008, when we started having employment control frameworks.

“That meant in practical terms we lost around 400 staff and at the same time, we saw our student numbers increase by about 1,500, so classes are larger and people have to work a lot harder,” he said.

UCC’s ranking was particularly badly hit because many of the job losses were in the fields of science, engineering and medicine, which are critical to the rankings, he said.

“We lost about 12 per cent of our academic staff in the sciences, compared to six per cent in the humanities - it just happened that a lot of people on fixed-term contracts which ended during this period and people who were taking early retirement were working in the sciences and medicine.

“And of course it’s science and food science and engineering and medicine that gives you your journal papers, your citations and your patents, which . . . give you your ranking under the QS system,” he said.

Speaking on Tuesday, Mr Bruton said: “I made it absolutely clear that any new money, whether it comes from students, employers or indeed the State, it has to be locked into policy tools that deliver the priorities that people expect.

“We don’t have the option of doing nothing about the long-term funding of our higher education system - we do need to get a long-term political vision for this.”

However, Dr Murphy said: “It is not the case that universities lack vision - we know exactly what our role in society is and what [our] duties are to the future generations.

“Regarding vision - it is very disappointing to hear such a nebulous criterion being set before us as we seek to remedy the resource challenge.”

Responding to Mr Bruton’s call for greater access for students from poor backgrounds and those with disabilities, Dr Murphy said the Irish third-level sector had made huge strides in this regard in the past 10 to 15 years.

“But the Minister should also remember [that] to support a student from a disadvantage background costs considerably more than other groups of students, because they need more tuition support and other forms of sustenance, all of which costs money.”