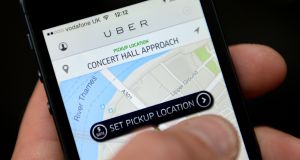 Currently Irish customers can only book a taxi or limousine through the Uber app rather than a private car. Photograph: PA Wire

Controversial ride-sharing company Uber will not be allowed to operate in Ireland using private cars as it does in other countries.

The National Transport Authority (NTA) told the San Francisco-based company its model was not appropriate for Ireland.

Currently Irish customers can only book a taxi or limousine through the Uber app rather than a private car.

Uber links passengers with private car owners through an app. It has been described as a “disruptive technology” as it threatens the traditional model of taxi and limousine hire.

In a letter issued through a Freedom of Information request from RTÉ, the NTA said the proposal for a pilot scheme in Limerick that would allow private car users offer their services to passengers through Uber was “undesirable”.

The authority told Uber it was not legal to operate an unlicensed ride sharing serving in Ireland.

It went further to state that, even if such a service was legal, it would not support the Uber proposal. The NTA said operating an unregulated regime would undermine the regulated taxi sector.

The authority told Uber: “Notwithstanding the above legislative position, it should be stated that the NTA is unsupportive of this proposal.

“Operating parallel regulated and non regulated regimes, even on a pilot basis is undesirable in our view and can only serve to undermine the regulated transport system . . . the issue of unfair competition arises. This is not an approach which could be supported by the NTA.”

Although it is legal in countries such as the United States and Britain for Uber to operate through private car owners, many European countries have banned the company from operating such a service.

France, Spain and Belgium are among the European countries that have banned Uber using private drivers over fears over how it would disrupt the regulated taxi industry.

Uber has been mired in controversy since the beginning, and co-founder Travis Kalanick quit his position after allegations of systemic sexual harassment at the company.