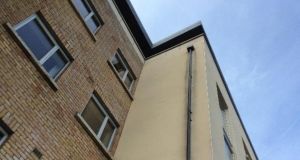 The Carrickmines Green estate, where a number of defects have been identified including inadequate fire stopping, badly fitted fire doors and damp

A Dublin local authority is at the centre of a row over fire safety at a south Dublin estate after agreeing to purchase a number of apartments for social housing in the complex, which has structural and fire safety defects.

Existing apartment owners at the complex, Carrickmines Green, are blocking the sale of 10 apartments to the local authority pending the completion of repair works sought after structural inspections.

Accountancy firm McStay Luby, receiver to the complex, is taking legal action against the owners’ management company to compel it to sign off on the sales.

Dún Laoghaire-Rathdown County Council said it was in negotiation to buy the apartments and that the fire safety and structural integrity of properties would be assessed as part of its due diligence process.

“Should improvement works/repairs be required, a programme of works is agreed to ensure compliance with relevant building standards, and the combined acquisition/upgrade costs represent good value for money.”

It said it would be “inappropriate” to comment on the cost of the apartments at this time.

Developer Alan Hanly’s Laragan Developments started building Carrickmines Green, between Foxrock and Kilternan in south Dublin, in 2006, but construction stopped in 2008 when the recession hit.

In 2009, McStay Luby was appointed as receiver over Mr Hanly’s assets including Carrickmines Green.

The receiver undertook to finish the complex, and all but 12 of the apartments in the estate of about 180 units have been sold.

Dún Laoghaire-Rathdown County Council last year agreed to buy 10 of the remaining apartments, but the Carrickmines Green Owners’ Management Company has said it will not approve the sales until the receiver has rectified defects in the blocks.

A report from Scott Murphy Chartered Building Surveyors, commissioned last year by the management company and finalised last May, found defects throughout the complex.

The 250-page report said while work had been done in 2016 to fix some defects, deficiencies remained in fire protection measures such as inadequate fire stopping, fire doors which did not fit into door frames, absence of smoke seals around some doors, blocked outlets to smoke vents, and inadequate smoke ventilation in basements.

It also detected significant damp and mould problems in the common areas, leaking waste pipes and water penetration through cracks in walls. It also noted that in places where repairs had been made, “builders’ debris” had been left discarded in service shafts running between floors.

Core Estate Management, managing agents for the complex, said it is the management company’s view that the receiver, now acting as the developer of the complex, is responsible for fixing the defects.

“The management company is not happy to sign leases for a number of apartments due to concerns relating to building defects and in particular fire safety issues,” Donal Ashe of Core said.

The management company would be happy to sign the long-term leases, which govern the sales, if the defects were fixed by the receiver, he said.

“We always strive to work in the best interests of owners and ensure the safety of all residents,” Mr Ashe said. He added that the management company would be issuing a counterclaim against the receiver.

Receiver Des Gibney of McStay Luby said representatives of the receivers had “engaged extensively” with the management company and individual owners and appreciated “the importance of the underlying issues for each of the individual property owners”.

“Resolving the issues at Carrickmines Green has been difficult and protracted,” said Mr Gibney, but he added that more than €500,000 had been spent by the receivers on works to the common areas, including works recommended by the Scott Murphy Report.

The receivers were “committed to reviewing the Scott Murphy report” and “addressing any further fire safety issues identified”, he said .

Due to issues of confidentiality the receivers did not wish to comment on “specific purchases by third parties”, he said.