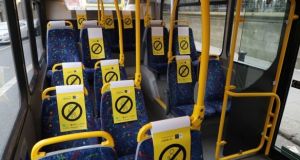 It was difficult to manage groups of people at bus stops, NTA chief executive Anne Graham told RTÉ radio’s Today with Sarah McInerney show, which was why the NTA was appealing to people not to travel at peak times unless it was an essential journey and they were an essential worker.

Ms Graham also encouraged people to have conversations with family and friends about the wearing of face coverings on public transport. However, when asked if the NTA wanted face covering to become mandatory, she said that was a matter for public health officials.

When further pressed if the NTA would consider not allowing passengers without face coverings onto public transport, Ms Graham said it was something to consider but it was a matter for the Government.

The NTA would continue to encourage people to use face coverings while on public transport, to travel at off-peak times and to walk or cycle if they could, she said.

The responsibility rests with the customer, she said. “This is something that may be with us for a number of months.” Capacity was not an issue at the moment, but she acknowledged that occasionally customers could be left behind at bus stops as demand grows.

“It is getting to the stage where this could be a problem,” she said.

In Phase 3 it will become more difficult to maintain the two metre distance at peak times. “That’s why we’re encouraging people to travel off-peak and urging employers to allow staff to work from home.”

The NTA is looking to see if it can increase capacity off-peak, but there could not be any additional capacity at peak times under the present guidelines.

“Reducing the two metre rule to one metre would assist with capacity. It will become difficult if demand continue to increase, that’s why we are encouraging people to use public transport only for essential journeys.”

Rural transport services are busier than ever, she added.

Ms Graham also said that revenues have decreased dramatically across the board. Fares usually account for 65 per cent of income, which will mean more pressure for increased State funding so that services can continue up to the end of the year.