There have been no reports of injuries as of yet, but fire services remain at the scene 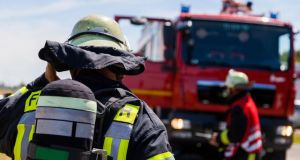 A number of properties at Lakeview in Mullingar are under threat from the fire Photograph: iStock

Two houses in an estate in Co Westmeath were “extensively damaged” in a fire on Tuesday.

The alarm was raised shortly after 8.30pm when gardaí and fire services were alerted to a house fire at the Avenue, Lakepoint, in Mullingar.

Emergency services attended the scene, including several units of the fire brigade, which worked to bring the blaze under control.

A spokesman for the Garda said two houses had been “extensively damaged” by the fire, while two further houses were “damaged by smoke”.

There are no reports of any serious injuries. It’s understood foul play is not suspected at this time.

“Fire Services have primacy at the scene currently,” said the Garda spokesman. “Gardaí expect to be in a position to examine the site tomorrow morning.”