Two girls, a boat, and a voyage from Cape Cod to Connemara

Méabh Ní Ghionnáin from Galway with Kaitlyn Dow from Connecticut, who launched the 1.5m sail boat across the Atlantic. 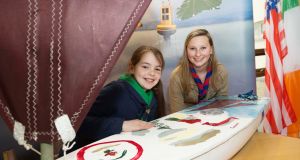 Méabh Ní Ghionnáin from Galway with Kaitlyn Dow from Connecticut, who launched the 1.5m sail boat across the Atlantic. Photograph: Andrew Downes

When US secondary school student Kaitlyn Dow launched a model yacht off the Cape Cod coast last Spring, little did she know it would eventually take her and her family to the Connemara coastline.

And when Co Galway primary school pupil Méabh Ní Ghionnáin heard about the boat from her aunt who runs a pub in Carna, little did she think that she might actually spot a small white sail down on her home shoreline.

The 1.5 metre sailboat Lancer took 139 days to make an unmanned passage across the Atlantic, landing on rocks at Oileán Anamna near Leitir Móir last September.

Kaitlyn, now aged 18, had been tracking it as part of her research project at Waterford High School in Connecticut to study ocean winds and currents.

Launched off the Woods Hole Oceanographic Institute research ship, Neil Armstrong last May, Lancer was fitted with a GPS transmitter, which gave updates on latitude and longitude every eight hours.

At times it seemed to go around in circles, but as it approached the Irish coastline, both she and her fellow students and science teacher, Michael O’Connor, became apprehensive.

Kaitlyn sent messages to west coast pubs on social media, asking them to keep a weather eye out for an unusual landing. Publican Cliona Ní Chualáin of Ti Mheaic in Carna mentioned it to her eight year-old niece, Méabh.

Méabh checked its GPS position, and calculated it was close to Oíleán Anamna, which she can see from her house in Leitir Móir. On the morning of September 17th last, she took her father, Stiofáin, a fisherman, down to the shoreline . Her mother Neasa recalls that as she walked over the hill she could “see a small white sail flapping in the wind”.

“Méabh’s mom sent me a picture on Twitter,” Kaitlyn says . The model boat was only slightly damaged, and still had much of its cargo, including pencils, pamphlets about Long Island Sound, a Project Oceanology T-shirt, and a few stuffed animals.

“I also included a USB filled with pictures, stories, letters, and poems from a fourth grade class,” Kaitlyn adds.

Méabh’s local sea scout group and Ciarán Oliver and James Rattigan of Port of Galway Sea Scouts repaired the model and fitted it with a Galway hooker sail.

Last week, Kaitlyn and Méabh met for the first time. The US student and her teacher raised community funds for a trip to Ireland, along with her parents Kathleen and David and brothers Kristopher and Kody.

Kaitlyn and Méabh visited the Marine Institute in Galway, where they heard of plans for a further voyage by the Lancer. It will be launched from the institute’s research ship Celtic Explorer during its transatlantic expedition in April.

“This story is a wonderful example of both science literacy and citizen engagement with the oceans,” said Marine Institute director Dr Peter Heffernan.