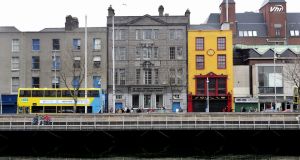 The north inner city will be blighted by traffic if plans to ban cars from parts of the Liffey quays are implemented, residents and local politicians have warned.

Dublin City Council plans to ban cars and lorries from parts of the north quays to accommodate additional bus and bicycle lanes.

Some residents say they fear the measures will push more cars into small streets and create “rat runs” throughout the north inner city.

In a bid to ensure the smooth running of Luas, cars travelling east along the Liffey will be required to turn left onto O’Connell Street. Traffic will not be permitted to continue straight onto Eden Quay, which would be restricted to public transport, and will also be prohibited from turning right onto O’Connell Bridge. 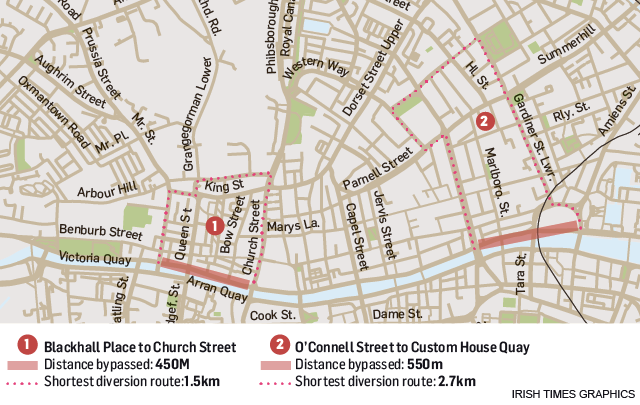 Similarly, plans for a continuous cycle path along the river, also on the northside, would see general traffic barred from Ellis and Arran Quays. Cars heading east would have to turn left onto Blackhall Place at James Joyce Bridge and could not rejoin the quays until Church Street.

For motorists forced to turn left onto O’Connell Street, the shortest diversion route to return to the riverside at Custom House Quay would be 2.7km. The same journey currently can be made in 550m. The diversion route would take motorists up O’Connell Street and around Parnell Square onto Gardiner Row and Denmark Street, in front of Belvedere College, before turning right onto Mountjoy Square and Gardiner Street towards the Custom House.

The Mountjoy Square Society said it had battled the council for years to be recognised as a residential area.

“We had agreed plans for a zebra crossing, but this would cut off the west side of Mountjoy Square from the Park,” Karin O’Flanagan, chairwoman of the society said. “We thought the council had aspirations for a civic plaza at Parnell Square, now it’s going to be a major traffic artery.”

Labour spokesman for urban regeneration Joe Costello has written to city manager Owen Keegan warning of a “tsunami of traffic” if the Ellis and Arran Quays diversion goes ahead. He was also “deeply concerned” about the O’Connell Street route.

Independent councillor Nial Ring said councillors were being excluded from the decision-making process, and public consultation on the routes was “just a PR exercise”.