New laws to target drivers who overtake cyclists too closely 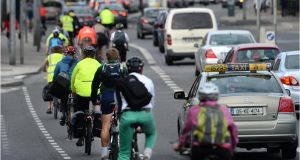 New laws making it an offence for drivers to pass cyclists too closely will be introduced in coming months, Fine Gael has said.

Under the proposed new legislation, motorists would be obliged by law to pass cyclists no closer than 1.5 metres on roads with a speed limit of 50km/h or higher. On roads where the speed limit is under 50km/h, the safe passing distance would be set at one metre.

Drivers found to have breached the new rules would face an €80 fine and have three penalty points added to their licence.

For cases that progress to the courts and where guilt is proven, the penalties increase to five penalty points and a fine of up to €1,500.

Mr Cannon said he was hopeful the Bill would be passed in the Dáil before the summer recess.

“A worrying amount of drivers seem to have a ‘no contact, no harm’ attitude,” he said. “Over the last 24 months 20 cyclists have been killed on Irish roads. It is no longer acceptable to expose our cyclists to huge risks on our roads and this law sets out to significantly reduce those risks. 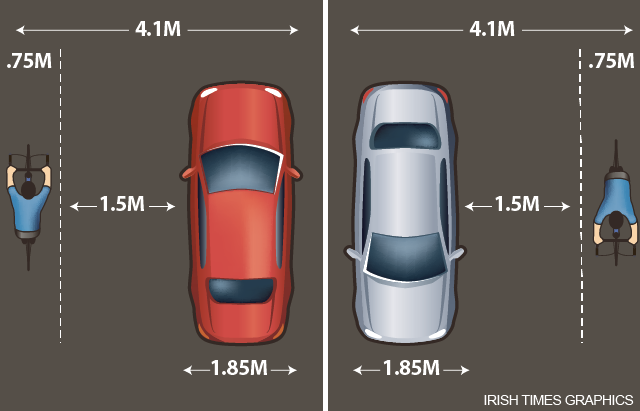 “A minimum passing distance law is essentially about creating a safe space on our roads for cyclists, a space where they feel protected,” Mr Cannon said.

While many drivers already give space to cyclists, he added, others do not. The new legislation, he said, was aimed at bringing about a cultural change so drivers are “aware of the vulnerability of cyclists, young and old, and drive accordingly.”

Ms Doherty said a campaign would have to be run to raise awareness as it was not enough to change the rules of the road.

Fine Gael said research by the American League of Cyclists in 2014 found up to 40 per cent of cyclist fatalities occurred when cyclists were hit from behind by a vehicle travelling in the same direction.

The introduction of the safe passing distance comes after a boom in cycling for over a decade, with figures published in recent days showing more cyclists than ever commuted in Dublin last year. On some roads in the city, the number of cyclists now exceeds the number of vehicles during peak traffic hours.

The plans to introduce a safe passing distance in the Republic follow similar moves in other jurisdictions in Europe, Canada and about half of US states.

The proposal has been welcomed by cycling campaign groups.

Cyclist Phil Skelton began the Stayin’ Alive at 1.5campaign after two cyclists were killed in his native Wexford.

His group has been the key voice advocating for the safe passing distance and he welcomed the proposals saying they would make the roads safer for all cyclist, not just enthusiasts who train and take part in events.

“If you are not a cyclist it can be very difficult to imagine just how intimidating it is to be overtaken by a vehicle too closely.”

Dr Mike McKillen of the cyclist.ie advocacy group said the new proposals were long overdue, saying significant numbers of drivers did not give cyclists enough room.

“This scares the life out of the rider and it’s akin to standing on the edge of a railway platform while the train thunders past you.

“Hopefully once enacted it will lead to parents allowing their children to cycle to school in increasing numbers once they realise that drivers accord their children proper respect in traffic by not overtaking them too closely.”