Figures on display at Café Bar H, Grand Canal Quay, which is owned by Rita Crosbie

The four statues removed from outside the Shelbourne earlier in the summer were originally part of set of six two of which are still on display in Cafe Bar H and owned by businessman Harry Crosbie. Video: Ronan McGreevy 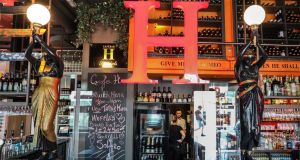 Two statues on the bar in Cafe Bar H, Grand Canal Square, are from the same series as those removed from outside the Shelbourne Hotel. Photograph: Crispin Rodwell / The Irish Times

Four Shelbourne Hotel statues have gone from public view, for now, but there are two more in Café Bar H at Grand Canal Quay, Dublin where they have been for almost 15 years.

The statues were removed from outside the Shelbourne Hotel, Dublin last month. Hotel management said they took the decision to remove the statues, which have been in place for 153 years, in light of world events and the Black Lives Matter movement calling attention to the legacy of slavery.

However, the hotel is a protected structure, meaning changes such as the removal of the statues would require planning permission.

Café Bar H is run and owned by Rita Crosbie, the wife of businessman and developer Harry Crosbie who was gifted the statues by the previous owners of the Shelbourne, a consortium led by developer Bernard McNamara.

The consortium bought the hotel at the height of the Celtic Tiger in 2005 and decided on a complete renovation, which involved removing the statues – an Egyptian princess and a Nubian princess – from the Horseshoe Bar.

“I heard the statues were to be scrapped and complained that they were an important part of Dublin history. I said that if they weren’t going to look after them I would, and so they were gifted to me,” Mr Crosbie said.

“I was delighted to accept them because they are such an important part of Dublin’s heritage and history.

“And I made the promise at the time to keep them and look after them and make sure people had easy access to see them and that’s what Rita has done in the cafe.”

Since the removal of the four statues, art historian Kyle Leyden has said 19th century documentation proves conclusively they do not depict slaves. Mr Leyden, a lecturer in the history of art and architecture at the University of London, says the original catalogue from which the statues were ordered clearly label them not as slaves, but as Egyptian and African women.

Enforcement action has been initiated by Dublin City Council against the Shelbourne Hotel for the removal of the four statues from the front of the building. Hotel managers have until August 27th to defend their actions or restore the statues to the outside facade.

Mr Crosbie said he was “horrified” at suggestions that two of the Shelbourne Hotel statues depicted slaves.

“They have been a favourite of customers in Café Bar H for years. I’m sure if you could ask them they’d be calling for the other four to be freed.”

Mr Crosbie said the statues in Café Bar H and the Shelbourne Hotel did not belong to individuals, but to the city and neither he nor the hotel management had a right to remove them.