Some Irish hauliers will have to look at other routes to Europe, says Eamon Ryan 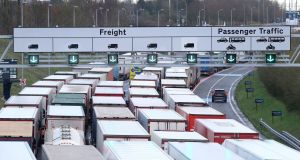 Minister for Foreign Affairs Simon Coveney has said that everything possible will be done to repatriate Irish truck drivers stranded at UK ports trying to get to the Continent.

Up to 250 Irish lorries stuck in England face returning home and dumping product after France banned road freight from Britain due to a new Covid-19 strain.

France suspended all air, rail, road and seat traffic from the UK on midnight on Sunday for at least 48 hours in an effort to stop a new strain of the coronavirus spreading from Britain.

Mr Coveney told RTÉ radio’s Today with Claire Byrne show that he anticipated ferry routes between the UK and Europe would open up again soon as it was not something anyone wanted to see closed off for any length of time.

He repeated a warning to hauliers, truckers and businesses not to attempt to use the land bridge through the UK. They should not leave Ireland unless they had a confirmed sailing from the UK to France.

Mr Coveney said there would be a sailing from Ireland to the French port of Cherbourg on Monday which was full, and that there were a number of direct ferry options tomorrow.

Negotiations were ongoing between the Department of Transport and the operators of the planned ferry from Rosslare to Dunkirk about commencing the service earlier than the first week of January. “There is significant capacity on direct ferry routes.”

The Minister also said he did not anticipate any shortage of foodstuffs as had been predicted for the UK by grocery chain Sainsburys. There had been “quite a bit of stockpiling”, he said, but there was no evidence that there will be any shortages in Ireland.

Supply chains will change in the weeks ahead, he said and he was hopeful that the land bridge issues would be resolved in the “next few days.”

Independent TD and former president of the Irish Road Haulage Association, Verona Murphy has claimed that, contrary to comments by the Minister for Foreign Affairs, there is not capacity to get Irish trucks home.

“He has no idea, it would appear,” she told RTÉ radio’s Today with Claire Byrne show. “There are 200 odd trucks that went to the UK to try to use the land bridge, there’s another 200-300 heading for Cherbourg, and some already there that are trying to get back into Ireland. As well as another 200 trying to leave Ireland to try to take product to the continent.

“I’ve got three factories in the south east with €1 million worth of meat products and they can’t get bookings on ferries, to France and Holland.”

Irish residents currently in the UK would be repatriated as soon as possible with the Department of Transport in communication with the airlines about a number of flights.

Anyone arriving on those flights would be expected to quarantine for 14 days. They would be obliged to fill out the locator form, and it was illegal to fill out the form inaccurately. There would be follow up calls - but not to everyone, he said.

EU-wide plans will be announced in the coming hours to reopen freight traffic into ports in France to and from the UK, the French government has said.

French minister for transport Jean-Baptist Djebbari said that the “in the next few hours” there will be a “solid health protocol” put in place to ensure traffic from the UK can resume.

The French embassy in the UK tweeted details of the new plan for a new protocol to reopen driver-accompanied traffic freight on the English Channel on Monday morning.

Ferry companies offering direct routes to continental Europe are being asked to bring forward services due to commence the first week of January, Minister for Transport Eamon Ryan has said.

Mr Ryan said some Irish truckers currently stranded at UK ports awaiting sailings to the continent will have to turn back and look at other routes.

When asked if people who had travelled into the country in recent days should self isolate, Mr Ryan said they should.

The Minister defended the Cabinet decision to wait until Tuesday to announce if restrictions will be reintroduced sooner than January 6th,saying the Cabinet needed to be fully updated by their European colleagues and by Nphet.

It was likely that there will be a return to restrictions sooner than originally planned, he admitted. There was now a dual time line, he said. It was going to be a balance between how quickly the vaccine could be rolled out and continuing to implement public health measures.

He said the new, apparently more contagious, variant of Covid reported in the UK proved how important it was for people to take the vaccine when it becomes available. “It is the best way for us getting away from this problem,” he said.

Mr Ryan added that schools, especially secondary schools, had done a good job and they were a safe space.

The Government was just waiting for approval from Europe for the vaccine at at which stage the roll out could begin, he said.

Responding to a suggestion by a professor of European public health at the London School of Hygiene and Tropical Medicine, Martin McKee, that there was enough evidence to be “very concerned” about the new strain of Covid-19 identified in the UK and a strong case to ban Irish freight drivers from entering the UK temporarily, Mr Ryan said that the freight companies have run an isolated system and the evidence to date would show that Ireland’s freight system was a safe process.

The president of the Irish Road Haulage Association Eugene Drennan has said that there are between 200 and 250 Irish truck drivers stuck at English ports trying to get to the Continent.

Also speaking on Morning Ireland, Mr Drennan warned that no business or trucker should attempt to move goods on Monday unless they have a confirmed boat booking.

Mr Drennan added that he hoped truckers at UK ports awaiting sailings into Ireland would be allowed to travel home on their respective ferries on Monday and Tuesday.

“The ferry companies have to do their utmost to get us home and that leaves something to be desired at the moment.”

Speaking on Newstalk’s Pat Kenny show later, Mr Drennan said that the travel ban implemented by France failed to take into account Irish hauliers using the land bridge between the continent and the UK.

“France did not think of Ireland when they brought in this blanket ban yesterday afternoon. Because of that, we have 200 to 250 Irish people trying to get home,” he said.

Irish registered trucks should be “pulled out” of the long queues which have formed at the ports and France should make an exception to “help out” a fellow EU state, he said.

When asked if the truckers travelling today would get back in time for Christmas, Mr Drennan said they might have to consider flying home and leaving the trucks parked in France.

There was no problem with freight moving from Ireland to the UK today, he said. “Freight is moving, for anyone who is concerned about a family member who is travelling outward or inward, they can travel today or tomorrow.”

Mr Drennan raised the issue of gifts bought online which might not arrive in time for Christmas. “People who shopped online may not get packages for Christmas now and they may need to do traceability checks this morning to see where their item is and is it on the way.

“The thing with these major sites is that you may end up shopping in Germany - and that may not arrive this week. There is some possibility that some stuff won’t get through.”

People should check whether their order has left its distribution centre and if not, they may need to make other arrangements, he warned.