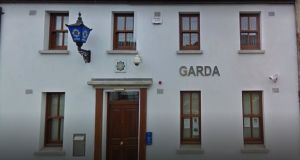 A file image of Dunmanway Garda station which a court heard was attacked by two men armed with an iron bar. Photograph: Google Street view

Two men have been charged following an investigation into an attack on a Garda station in west Cork in which two men, wearing balaclavas and armed with a metal bar, smashed the station’s windows earlier this month

Timmy McCarthy (23) and Thomas Douglas (22), both with an address at Cousane Gap, Dunmanway, Co Cork, were brought before a special sitting of Clonakilty District Court on Saturday evening and charged with criminal damage at Dunmanway Garda station at 3.51am on December 17th.

Insp Fergal Foley told the court gardaí were not objecting to bail for either accused, once certain conditions were met including that they sign on three times a week, abide by a curfew, stay out of Dunmanway town and not interfere with witnesses.

Insp Foley said in the case of Mr McCarthy, gardaí wanted him to abide by a 10pm to 6am curfew while staying at Sheila’s Hostel in Cork city and sign on every Monday, Wednesday and Friday at Mayfield Garda station. Gardaí asked Mr Duggan do the same at Bantry Garda station.

Both men were arrested at a house at Cousane Gap on Saturday morning along with a young woman in an operation involving gardai from Bandon, Dunmanway and Clonakilty, backed up by the armed Regional Support Unit and the Garda dog unit.

The woman, Celeste Moat (20), with an address at Cousane Gap, Dunmanway was charged with obstruction of gardai at Cousane Gap on December 23rd and all three defendants were remanded on bail by Judge John King to appear at Clonakilty District Court again on January 16th.