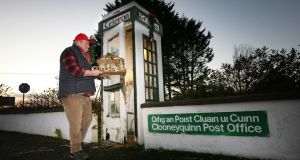 When Richard Cullen placed a Christmas crib in a disused telephone box at Clooneyquinn, Co Roscommon, he was thinking, he says, of another mother and child, separated by circumstances many years ago.

Every year in December the Offaly man recreates the Nativity scene in the former Eircom kiosk on the N61 Boyle to Roscommon road, and each year it stops people in their tracks, with many drivers pulling their cars in so they can take photographs or spend a few minutes reflecting.

“I would say someone stops every hour,” said Mr Cullen. “Some people take photographs. I have seen people go on their knees in front of the box. Whole families of travellers stop there and pray.”

When he bought the former Clooneyquinn post office 12 years ago, the retired businessman became convinced the telephone box was a sacred place after he discovered a solid gold cross wedged behind a panel where the old black phone was attached.

“I got a vision in my head of a woman talking on the phone to her son who was probably in England, which seemed half a world away to her, a woman who really wanted to keep her son safe and so put that cross there.”

He said that when he is in the telephone box he thinks also of tearful wives waiting for calls from husbands who may have had to emigrate to find work, or worried parents ringing doctors, or desperate attempts to contact priests for sick relatives or neighbours. He also thinks of all the happy family news which was related there over many decades.

He couldn’t bear to think of the box being taken away or dismantled and reckons he made a good call when he paid Eircom €50 to leave it in situ so he could preserve it as a shrine to all the mothers and sons for whom it was a lifeline through lonely times.

For most of the year a Child of Prague is placed there, but at Christmas he gets the local priest to bless straw and then the crib goes into the box, with the figurines lit up thanks to a link with the power in his home.

“I think the telephone box is a symbol of Irish life and doing this gives me strength as well,” he said.