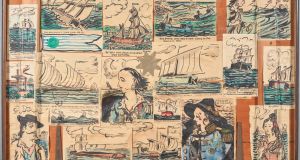 The wooden travelling case belonging to artist Jack B Yeats which had 19 of his original watercolour drawings pasted on to the inside lid. Photograph: Sotheby’s

It’s the gift that keeps on giving.

Two years ago a mystery donor presented the Model Arts Centre in Sligo with a quirky mix of Yeats family artefacts.

Among them were nine model boats made by Jack B Yeats, as well a wooden travelling case belonging to the artist, which had 19 of his original watercolour drawings pasted on to the inside lid.

When the Irish Heritage Council recently provided funding to the Model to have conservation work done on these, staff at the Paper Conservation Studio in Dublin were amazed to find two more originals hidden behind the 19 drawings. Several prints were also discovered, including one of a John Butler Yeats drawing of his son Jack from 1875, when the artist was a four-year-old.

Moreover, the hidden surprises did not end there.

Wood conservators at Conservation Letterfrack in Co Galway discovered a model of a Jack B Yeats creation, Theodore the Pirate, in one of the toy boats they were restoring.

Theodore featured in some of the artist’s early drawings and also in A Broadside, the publication edited by Jack and later his brother William Butler Yeats, and published by their sister, Elizabeth in Cuala Press.

“The conservator was blowing air into the hull to remove dust and he appeared,” says Emer McGarry, director of the Model. “It’s a cardboard figure with the word ‘help’ written on his back. It is really sweet.”

The artefacts and watercolours, which experts say underline Jack B Yeats’s playful nature and love for seafaring tales, were just part of a special acquisition following a Yeats family sale at Sotheby’s, London in 2017.

When paper conservator Patrick McBride and his colleague Ciara McQueirns started removing the 19 watercolours from the travelling case lid, they were thrilled to discover there was more to the donation than met the eye.

“It was a lovely project to work on, a real fairy-tale story,” says Dr McBride. “We are so privileged, we are the first people to see these since he pasted them here over 100 years ago.”

While the drawings recovered were in good condition, Dr McBride says there was some damage from wood resin and hinge rust. A decision has been made to mount them and replace them on the lid with facsimile images.

“The colours were still relatively strong given that they are over 100 years old, probably because the lid was closed so they were not exposed to the light.”

The drawings are of Boatswain Hardtack (“a reckless swashbuckler” ) and Piney on the Gara River.

In a sales catalogue, Sotheby’s noted that when British poet laureate John Masefield spent two weeks with Jack B Yeats at their Devon home in 1903, the two men amused themselves by making model boats and sailing them.

“It’s lovely to think that these two men, who were in their 30s at the time, were enjoying sailing model boats on the river,” says Ms McGarry, who is planning an exhibition as soon as Covid-19 restrictions permit. She says it will be geared at children, with watercolours hung at an appropriate height.