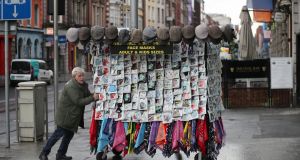 HSE director general Paul Reid has said he was confident that if the public do all the basics of wearing masks, observing hand hygiene and practising social distancing then “we can make progress” to get down Covid-19 down to “sustainable lower levels.”

Mr Reid told RTÉ Radio’s Morning Ireland programme said that while some progress had been made under Level 5 they were working behind the scenes to see why numbers had stalled.

There was not an aim “to demonise people” he said, but people needed to realise that as they meet there was a risk, if they did not wear masks or meet indoors then risks were amplified.

Mr Reid gave an example of a meeting which was attended by eight people and none of them were wearing a mask. All eight have now tested positive for Covid-19.

“I don’t believe there is a magic number, we want to get it down further. We have made good progress, but last week the numbers seemed to freeze.”

Mr Reid pointed out that even during the first wave of the virus in the spring, Ireland’s outcomes were better than other European countries.

Daily admissions to hospitals are down seven per cent, with daily activity down eight per cent while trolley numbers were down 70 per cent on this week last year. “That’s a very significant number.”

This reduction could partly be attributed to more home help, he said. The home help waiting list was down to 2,800 from 7,500.

Mr Reid said he was concerned about outbreaks of the virus in hospitals with 450 staff at present unable to work either because they had tested positive or they were close contacts.

It was very difficult to identify how the virus got into health care settings as it may have come from health care workers, from patients or from visitors.

A worker on a ward has to wash their hands ten times per hour on a 10 hour shift, he said. “It is very difficult for our teams.”

The State’s chief medical officer Dr Tony Holohan warned that the progress on the disease had slipped in recent weeks.

The previous sharp decline in numbers of new cases in the early weeks of Level 5 restrictions had plateaued, meaning the country had effectively “lost a week,” Dr Holohan said on Thursday.

The National Public Health Emergency Team (Nphet) reported concerns that people were socialising more as the six-week lockdown period wore on, and others were unnecessarily working from the office.

Officials expressed concern that recent positive news over the development of an effective vaccine for 2021 had led to people “taking the foot off the gas,” Dr Holohan said.

People were also understandably suffering from “pandemic fatigue,” and had “slipped” in keeping their number of daily contacts down, Dr Holohan said.

The message that people should work from home where possible “really hasn’t gotten through,” Dr Holohan told a press briefing.

“Car parks are full, canteens are full in workplace settings, people are really not listening to this message…Clearly many, many people who are in situations where they can work from home, are choosing not to do so,” he said.

Professor Philip Nolan, chair of Nphet’s modelling group, said the rapid decline in the number of new cases now levelling off was cause for “concern and disappointment.”

The number of people in hospital and intensive care was “declining very slowly over the last several weeks,” and similarly the number of coronavirus-related deaths per day was “not decreasing yet,” he said.

The R-number, the reproductive rate of the virus - a key metric tracked by officials - was currently estimated to be between 0.7 and 0.9, Prof Nolan said. Last week the R-number stood at 0.6, meaning the spread of the virus among the population had slowed substantially.

A new report has revealed that Ireland’s first lockdown was by far the longest in Europe for bars, restaurants, cinemas and non-essential shops.

The country with the next highest number of days where public spaces were shut was Finland (74 days) followed by Slovakia (66 days) and Bulgaria and Estonia (both 65 days).

The Health at a Glance: Europe 2020 report covers 36 countries in Europe including the EU 27, the UK, Turkey, Switzerland and Norway.

Ireland was also one of only six countries of the 36 to close both primary and secondary schools until the summer holidays, the others being Bulgaria, Finland, Italy, Spain and Latvia.