Chief Medical Officer Dr Tony Holohan has said that the State has "lost a week" of the current Level 5 lockdown as recent progress in reducing the spread of the coronavirus has stalled. Video: RTÉ 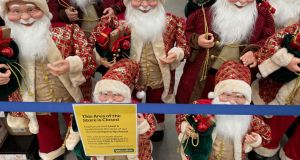 Woodies has cordoned off the ‘Seasonal Gift’ areas within their stores due to Covid-19 Level 5 restrictions. Photograph Nick Bradshaw / The Irish Times.

Recent progress in reducing the spread of the coronavirus has stalled, as people have “slipped” in adhering to lockdown restrictions over the last week, the State’s chief medical officer Dr Tony Holohan has said.

The previous sharp decline in numbers of new cases in the early weeks of Level 5 restrictions had plateaued, meaning the country had effectively “lost a week,” Dr Holohan said on Thursday.

The National Public Health Emergency Team (NPHET) reported concerns that people were socialising more as the six-week lockdown period wore on, and others were unnecessarily working from the office.

Officials expressed concern that recent positive news over the development of an effective vaccine for 2021 had led to people “taking the foot off the gas,” Dr Holohan said.

People were also understandably suffering from “pandemic fatigue,” and had “slipped” in keeping their number of daily contacts down, Dr Holohan said.

The message that people should work from home where possible “really hasn’t gotten through,” Dr Holohan told a press briefing.

“Car parks are full, canteens are full in workplace settings, people are really not listening to this message…Clearly many, many people who are in situations where they can work from home, are choosing not to do so,” he said.

There were a further 429 confirmed cases of Covid-19 recorded on Thursday, and four additional coronavirus-related deaths, NPHET reported.

Professor Philip Nolan, chair of NPHET’s modelling group, said the rapid decline in the number of new cases now levelling off was cause for “concern and disappointment.”

The number of people in hospital and intensive care was “declining very slowly over the last several weeks,” and similarly the number of coronavirus-related deaths per day was “not decreasing yet,” he said.

The R-number, the reproductive rate of the virus - a key metric tracked by officials - was currently estimated to be between 0.7 and 0.9, Prof Nolan said. Last week the R-number stood at 0.6, meaning the spread of the virus among the population had slowed substantially.

Recent data showed the average number of close contacts reported by people testing positive for Covid-19 had increased in the last week, from less than three to just over three. Prof Nolan warned that that “tiny difference” had led to progress in reducing case numbers dropping off this week.

“We really can’t predict what might happen over the next ten days. That partial increase in the level of contact we’re seeing hasn’t gone up further, so there’s some stability there.

There’s nothing in the indicators that we have right now that are saying this is definitely going to get worse,” he said.

There have now been a total of 2,010 coronavirus-related deaths in the State. A total of 69,473 cases have been confirmed by the National Public Health Emergency Team (Nphet).

As of 2pm on Thursday, 290 Covid-19 patients were hospitalised, of which 33 are in ICU. There have been 15 additional hospitalisations in the past 24 hours.

Dr. Tony Holohan, Chief Medical Officer, said on Thursday: “In our objective to use a six-week period to drive down Covid-19 infection in the community, our progress has stalled in the last week.

“We now have two weeks to get back on track. Drive down the disease by limiting the number of daily contacts you have. Work from home, stay at home and follow public health advice to get us to a reproduction number below 0.5 by December 1st.”

Meanwhile, Dr. Ronan Glynn, Deputy Chief Medical Officer, said deaths associated with Covid-19 have increased by 18 per cent in the European region over the past fortnight.

“Last week alone, Europe registered over 29,000 new deaths. That is one person dying every 17 seconds. We have made significant progress in Ireland over recent weeks, but the disease and its risks have not changed,” Dr Glynn said.

“Please continue in your efforts to follow public health advice, limit the transmission of Covid-19 in Ireland and protect those who are most vulnerable in our families and across our communities.”

“The data strongly suggests that a small, recent increase in the level of social contacts has led to the increase in reproduction number we see now. A small additional effort to reduce our contacts will make a big difference to reduce disease incidence before December 1st.”

Dr. Colm Henry, the HSE’s chief clinical officer, said the pandemic had placed huge demands on healthcare workers in addition to the standard care of patients.

“Their work now involves additional infection prevention and control measures which require constant vigilance and awareness. The best way we all can show our appreciation for their work is by doing your part to reduce community transmission.”

Earlier, new figures from the HSE were presented which showed hospital-acquired cases of Covid-19 increased by more than 160 per cent in the first week of this month, with 100 patients contracting the virus in acute hospitals in one week alone.

Health officials have warned that outbreaks in health care settings are of particular concern moving into the winter period.

Prof Cormican said preventing the spread of infection in hospitals “is always hard” because it is a setting which requires “intense person-to-person interaction”.

“When a hospital has an outbreak you can get a large number of cases in a very short space of time. We know that Letterkenny, Limerick and Naas have been struggling with large outbreaks and so the numbers came up quite quickly,” he said.

Prof Cormican added that healthcare workers are asked to clean their hands 10 times an hour and that “one lapse in a 12-hour shift can spread infection”.

“Nobody is happy about the number going up, we’re not saying anyone is to blame, but we, as the HSE, are responsible and we are going to do everything we can to get those numbers better,” he added.

“We’re very concerned that the numbers are going up but we’re working to control it and part of controlling it is tracking it, engaging with the hospitals.”

Hospitals are now being more proactive when hospital-acquired cases arise, he said, as staff go looking for other possible patients who may also have contracted the virus in this manner.

HSE chief executive Paul Reid said there are currently 290 Covid-19 patients in hospitals, 33 of whom are in intensive care units.

Some 65 per cent of the hospitalised cases are spread across seven hospitals — Letterkenny, University Hospital Limerick, Tallaght, St James’s, St Vincents, Drogheda and Beaumont — all of which have outbreaks to “various different degrees”.

“We know when it gets into healthcare settings, it’s hugely transmissible,” he added.

Over the last seven days, more than 75,370 tests have been processed, with an end-to-end turnaround time from referral to test result of 1.6 days where the test is negative, and 1.8 days when it is positive.

There was a “slight increase” in the positivity rate, which now stands at 4 per cent. Chief Clinical Officer Dr Colm Henry said the R number has also increased slightly to between 0.7 and 0.9.

Asked why the trend of declining cases had “stalled”, despite Level 5 restrictions in place, Mr Reid acknowledged outbreaks in hospitals, but added that outbreaks in private households were “still very prevalent”.

“Community transmission is still a factor but households [are] the most prominent one. It varies between counties but overall, the trend we were seeing has stalled. In our serial testing, we are seeing marginal increases in serial testing in nursing homes and in one way that’s an early warning indication for us,” he said.

There are currently 105 outbreaks in nursing homes, however chief operations officer Anne O’Connor said “most of those are being managed very well”.

Mr Reid also announced that the HSE has issued a tender for submissions on antigen testing, having received over 30 offers from companies in recent weeks.