Top Garda post: ‘If you take job, you take all that goes with it’

Politicians agree the Garda commissioner has a tough role, but sympathy is limited 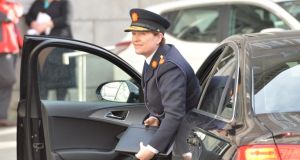 Nóirín O’Sullivan: “The last Garda commissioner was in and out to so many public forums that she wasn’t able to do her job,” according to Dermot Ahern. Photograph: Alan Betson

In her resignation statement, on Sunday, Nóirín O’Sullivan lamented that the job she was leaving had essentially become about “responding to an unending cycle of requests, questions, instructions and public hearings”.

O’Sullivan listed some of the oversight bodies she had to engage with during her time as Garda commissioner, naming the “Public Accounts Committee, the Justice and Equality Committee, the Policing Authority, and various other inquiries”. Her appearances at them gave rise to “inaccurate commentary”, she added, which led to yet more problems.

Even those who called on O’Sullivan in recent months to stand aside as commissioner concede that she had something of a point and agree that there is a robustness in Dáil-committee exchanges that did not exist a decade ago.

As well as the groups that O’Sullivan mentioned, An Garda Síochána also has to engage with the Garda Síochána Ombudsman Commission and implement the recommendations of the Garda Inspectorate.

Recent controversies mean the force and its senior management will also be examined by the Disclosures Tribunal, under Mr Justice Charleton, which is investigating allegations of a smear campaign against the Garda whistleblower Maurice McCabe, and the recently established Commission on the Future of Policing in Ireland.

Although the Labour Party leader, Brendan Howlin, led calls for O’Sullivan to resign, he acknowledged that he sees some validity to the view she expressed in her statement.

“I do believe we need to rationalise the number of bodies that have an oversight function of An Garda Síochána,” Howlin said, adding that O’Sullivan had faced an unprecedented series of crises.

He says that the Committee of Public Accounts had legitimate concerns about spending at the Garda training college, in Templemore, and points out that the beef tribunal of the early 1990s would not have been required if parliamentary queries had been answered.

But he said that the number of agencies with oversight of An Garda Síochána could be reduced as long as senior management were fully forthcoming with the organisations that remain.

Dermot Ahern, a former Fianna Fáil TD for Louth who was minister for justice between 2008 and 2011, said the large number of oversight bodies could put off potential external candidates to succeed O’Sullivan.

“The first question a person will ask, apart from the salary, is who are they answerable to,” Ahern said, adding that the engagement between the Garda commissioner and the political system was more “focused” during his tenure.

He said that, with the establishment of the Oireachtas justice committee, TDs now had more opportunities for high-profile questioning of senior officers.

“It got to a situation where the last Garda commissioner was in and out to so many public forums that she wasn’t able to do her job,” he said. “That needs to be cleared up a little.”

Senior Oireachtas figures are not sympathetic to these arguments; one source said O’Sullivan knew precisely what the role of Garda commissioner entailed when she accepted it.

“If you take up a senior appointment then you have to take everything that goes with it,” the source said, indicating that, although there may be an appetite to cut down on the number of oversight bodies, little can be done about the way public figures are treated at Dáil committees.

Howlin accepts there is an issue about the way committees such as that on public accounts behave when dealing with a high-profile figure embroiled in controversy. But he says that is largely the result of increased coverage of committees and a faster news cycle, as well as of the character of the TDs and senators involved.

Howlin accepts it is a change from previous standards, but he argues that nothing can be done about it now.