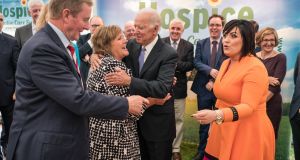 Former US vice-president Joe Biden has said he is "honoured" that Mayo’s first hospice will be forever linked with his late son, Beau.

Turning the first sod on the €10 million project in Castlebar on Tuesday, Mr Biden also paid tribute to the “incredible” work undertaken by the hospice movement, including its many volunteers.

The 47th US vice-president, who served under President Barack Obama, spoke movingly of his own experience of the health care and hospice movements.

Accompanied by his brother Jimmy and nephew Jamie, Mr Biden told a packed audience at the Mayo Roscommon Hospice Foundation how, just six weeks after he was elected a US senator, his wife Neilia and three children were out Christmas shopping when their car was hit by a tractor trailer.

His wife and their one year-old daughter, Naomi, died, and his two sons, Beau and Hunter, were seriously injured.

Mr Biden said his mother and father were both cared for at a hospice, and his son Beau had a two-year battle with cancer before dying in May 2015.

Mr Biden described how his official visit to Ireland in June 2016 had been “bittersweet” for that reason, as it had been a trip he had promised to take with Beau – a Delaware attorney general and a US army judge advocate who served in Iraq.

Mr Biden, a frequent visitor to the west of Ireland, explored his family connections in Mayo and Louth during his official visit last year.

His great-great-great grandfather Edward Blewitt and his wife Mary emigrated from Ballina more than 160 years ago, following their son Patrick across the Atlantic.

“I don’t know why my family left here in the first place – especially now,” he said to laughter. “But that’s another story.”