Send-off of all send-offs expected for retiring champion 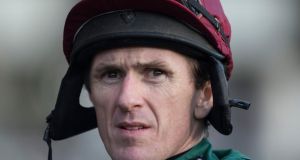 Tony McCoy’s last hurrah as a jockey at Cheltenham will be in the final race of the festival, which has been named in his honour. Photograph: Julian Herbert/PA

Before a race is run the script has already been written for Cheltenham 2015. Short of a last-minute withdrawal, all attention will be focused on Tony McCoy’s last festival as a jockey.

The old warrior will not care for all the fuss but it won’t deter his standing army of admirers.

McCoy’s domination of jump racing and his 19 straight years as a champion jockey has not always extended to Cheltenham.

He has been champion jockey at the festival only twice and the last time was in 1998. He trails Ruby Walsh, who has had 41 winners at the festival. McCoy has had 30.

Sentimentalists will hope he has a successful festival starting with the Stan James Champion Hurdle today, when he rides defending champion Jezki. He will be up against the favourite, Faugheen, ridden by Walsh; and two-time victor Hurricane Fly.

Whatever happens, McCoy is likely to get the send-off of all send-offs and the last race of the festival has been named after him. The AP McCoy Grand Annual Handicap Chase will be his last attempt to win at the festival.

Trainer Willie Mullins has assembled a team of 67 horses for Cheltenham this year and expects about 50 to run.

One way or another he is set to add to his 33 winners at the festival. Irish-trained horses won 14 of the 27 races in 2013 and 12 last year. All going to plan, the Tricolour will be much in evidence once again this year.

The annual exodus has gathered pace over the p

ast couple of days. Ryanair says it has added more than 30 flights to Britain to cater for Irish fans attending the four-day festival and estimates it will carry 15,000 passengers.

Aer Lingus has added two flights to its Dublin to Birmingham route and has assigned two bigger A-321 aircraft to the route for six days, adding a total of 1,200 seats.

With typical hyperbole, bookmaker Paddy Power estimates Irish punters will bet €125 million on the festival, or €27 for every man, woman and child in the State.

The festival frequently falls during St Patrick’s week, though not this year. However, St Patrick’s Day will be celebrated at the festival on Thursday, when the big race will be the Ladbrokes World Hurdle.

The weather forecast is for bright and blustery conditions today, continuing in a similar vein for the rest of the week.