Since Corrib gas was discovered in 1996, bringing it ashore has met many obstacles 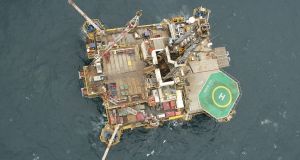 Sedco 711 drilling rig at the Corrib gas field. It is a semi-submersible drilling unit capable of operating in harsh environments and water depth of up to 550m.

August 2001: Mayo County Council approved permission for an onshore terminal to refine gas from the Corrib field on land formerly owned by Coillte at Ballinaboy, Mayo.

November 2001: A government petroleum lease is granted for the Corrib field

April 2002: Fianna Fáil minister for the marine Frank Fahey approved a plan of development for the Corrib gas field.

May 2002: Fahey signs 34 compulsory acquisition orders for access to private lands by a private company for the pipeline route. Royal Dutch Shell buys out Enterprise Energy Ireland including the Corrib gas field.

April 2003: An Bord Pleanála turns down planning permission for a Ballinaboy terminal, with inspector Kevin Moore describing it as the “wrong site” from perspectives of strategic planning, balanced regional development, environmental impact and sustainable development.

June 2005: The first formal gathering of the Shell to Sea group takes place, with members calling for the gas refinery to be at sea.

May 2006: A safety review recommends the pipeline’s pressure be limited to 144 bar.

October 2006: Some 170 gardaí are deployed to north Mayo as Shell resumes construction at Ballinaboy amid protests. Dempsey rejects a call from Shell to Sea for an inquiry into the optimum development concept for Corrib.

April 2007: Rossport farmer Willie Corduff wins the Goldman environmental award in the US.

May 2007: Shell initiates third level scholarship scheme as one of several recommendations on financial input from Cassells.

June 2007: 20 people, including residents and gardaí, are injured when Shell contractors attempt to enter privately owned lands at Pollathomas. Shell issues an apology and a Garda Síochána Ombudsman Commssion inquiry subsequently recommends disciplining of a senior garda handling the protest.

August-September 2008: Concerns about impact of refinery discharges on marine environment by Erris Inshore Fishermen’s Association result in Shell proposing an alternative, and offering fishermen compensation for pipelaying at sea.

November 2008: Minister for energy Eamon Ryan and minister for the gaeltacht Éamon Ó Cuív initiate a forum for the Corrib gas project in attempt to secure community resolution.

April 2009: Willie Corduff hospitalised after an assault during an overnight protest at pipeline landfall site.

June 2009: Fisherman and Shell to Sea supporter Pat O’Donnell and a crewman are rescued and claim their fishing vessel was boarded and sunk off Erris Head.

November 2009: Garda Ombudsman confirms 75 per cent of more than 100 complaints over handling of Garda security at Corrib gas project are deemed admissible for investigation.

November 2009: A second onshore pipeline route plan is rejected after Bord Pleanála finds up to half of it is “unacceptable” on safety grounds.

May 2010: A third pipeline route, through Sruwaddacon estuary between villages of Rossport and Pollathomas, is submitted by Shell to Bord Pleanála.

January 2011: The third pipeline route is approved by Bord Pleanála.

April 2011: A Garda Ombudsman public interest investigation is initiated after gardaí are recorded laughing and joking about raping women they had arrested at Corrib gas protest.

May 2014: Work is completed on the Corrib gas tunnel, the longest of its type in Europe.

March 2015: A discharge pipe from the Corrib refinery surfaces in Broadhaven Bay after storms.

December 29th, 2015: Final consent for project granted by Minister for Energy Alex White, with approval to operate pipeline under section 40 of the Gas Acts.