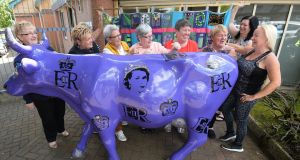 ‘A good mix of Fenians and Prods’ - the women in Shankill wisecrack to photographer: Colm Lenaghan/Pacemaker

For more than 30 years the Shankill Women’s Centre (SWC) on Belfast’s Shankill Road has been at the heart of the community, a haven for women during often dark days, where many have studied, learned skills, or simply built ties with neighbours.

Its symbol is the hummingbird, the tiny little bird which baffles scientists with its ability to fly forwards, backwards, sideways, upside down and hover. In the eyes of the centre, that roughly explains the role of women.

In bright sunshine, the women in the cross-community group are not short of opinions as they discuss identity, Brexit, this weekend’s upcoming royal wedding in London and what they make of Prince Harry’s wife-to-be, Meghan Markle.

They like her. A glamorous actress she may be but she’s “normal” and will be “an ambassador” for women: “She’s lovely and I think she is going through a tough time with all her family stuff,” says Donna Bates (43).

On Saturday, there will be a wedding street party on the Shankill. Tickets were “like gold dust”, but Bates got some. Over the past few days she has set about replicating old photographs of her family celebrating previous royal weddings.

She has searched through the local 50p shop for banners and flags, while she and her family deliberate over which red, white and blue outfits they will wear when they join their neighbours in celebration.

SWC worker Grainne Magee (43) from Hightown, who identifies as Irish but has a love for the late Princess Diana and a liking generally for princesses, jokes that the wedding is an “excuse for a party”.

“We had a tea party in the Cliftonville [a nationalist area] for the Queen’s jubilee after we got council funding,” she said. “We are independent and have our own views. If I want to have a royal party for Prince Harry, I’ll do it.”

Rosaleen Tolan (66) from the Talbot Women’s group in Upper Springfield is pleased to see that the British royals have embraced Markle, given that it had previously interfered in the love lives of Princess Margaret and Prince Charles.

“I am glad to see Harry has taken up his mummy’s role and won’t be dictated to,” Tolan says, adding that the American actress is becoming part of a privileged family but will now face all of the pressure that comes with that.

“She’s not going in with her eyes closed the way we all did,” she says. Laughter erupts from the rest of the women as they sit in the delightfully-titled “Big Room” with Belfast-based artist Ursula Burke (43), originally from Tipperary.

Burke is leading a craft class for women to sew hummingbirds and rosebuds for a banner to be used on June 10th during UK-wide processions marking the 100th anniversary of the vote for women.

Tina Conlon (63) from the Talbot group says the addition of Markle to the royals is welcome, but particularly important for Britain’s black population as “maybe it will make them feel a bit more welcome and included”.

Women from nationalist and republican areas should not have to defend, or explain their interest in this weekend’s celebrations, she argues: “If Martin McGuinness can meet the Queen I think we can sit down and watch a wedding.” But the royals should “be footing the bill themselves”.

In agreement on that point is Janice Dalzell (54) from Upper Ardoyne. She doesn’t feel British or Irish but identifies as Northern Irish, and clarifies “it’s loyalist Ardoyne” when a nationalist friend asks where she lives.

The photographer sets about getting an image, as the women exchange wise cracks about ensuring that there is a good mix of “Fenians and Prods” in the picture.

Eileen Weir has no time for anyone who would use the wedding to divide, rather than unite: “With cultural celebrations no matter what side it is the politicians hijack it and make it out to be ‘us and them’ to try to keep the division.”

“But we celebrate everything here,” says Weir, who works in community centres across north and west Belfast, adding that it is a myth that Catholic and Protestant have been mixing only since the Belfast Agreement in 1998: “It was always happening, just in the past some of it was under the radar,” she said.

“People accept we all have different opinions about things, we have the freedom to do that. We thought we were all going to be treated equally but all [it] did was bring Protestant and Catholic into the same unequal society,” she says.