‘Love going to a gig and not being able to see the artist,’ says one fan whose view was obstructed 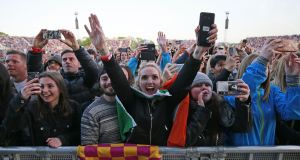 The promoters of the Ed Sheeran concerts in Dublin’s Phoenix Park are to make changes to the organisation of Friday’s show, following dozens of complaints from unhappy fans who attended his first performance on Wednesday night.

Overcrowding in the standing area forced people behind the seating stands thus impeding their view, while others complained that their view was obstructed by merchandising stalls.

Other fans complained about difficulties entering. “Myself and thousands of others were unable to get through the bottleneck of people standing in between the seating stands,” said Rachel Doogue from Clontarf.

“The seats should have been further back to allow [all] people with standing tickets to get in,” she added.

Ciara Mitchell, a safety steward for the Aviva Stadium, attended the concert and said the experience “frightened” her. She said she witnessed “a lot of children leaving the area with parents very upset because of the overcrowding.”

Fans also reported huge delays getting in and out of the venue with the walk taking about 40 minutes.

“It was obvious very quickly the stewards had already lost control,” said Mark McNamara, who travelled from England to see Sheeran perform.

A merchandise stand in the middle of the standing area obstructed the view for many fans. Many took to Twitter to voice their frustration about the layout and organisation of the event.

“Love going to a gig and not being able to see the artist. Hope the merch sales were good though,” wrote James Harding.

“Delighted I paid €81 for Ed Sheeran just to look at a t-shirt stand all night,” wrote Rachel Weafer.

Many fans are now writing to Aiken Promotions to complain about the event and request a refund.

In a statement, Aiken Promotions acknowledged the disruption and said “the team are meeting this morning to review it and are putting additional measures in place to prevent it happening again.”

Ed Sheeran will perform in Phoenix Park again on Friday and Saturday.