Still hope for Croke Park gigs to go ahead at the end of the month, says Tánaiste 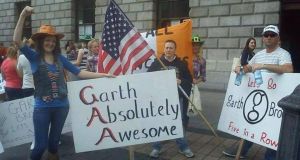 Fans of singer Garth Brooks took the streets of Dublin today in protest against the cancellation of concerts at Croke Park. Photograph: Steven Mangan 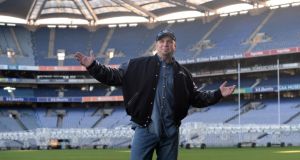 Tánaiste Joan Burton has said there is a ‘window of possibility’ in reaching an agreement over the staging of the Garth Brooks concerts at the end of the month. Brooks last performed in Croke Park in 1997.Photograph: Dara Mac Dónaill/The Irish Times

Ticketmaster has delayed refunds for Garth Brooks tickets until next Thursday as negotiations continue for the concerts to go ahead in two weeks.

The company said as talks continued in an attempt to find a resolution were ongoing, automatic refunds would not begin on Tuesday as originally planned.

“We would ask fans to continue to be patient and to hold onto their tickets for now,” the statement said.

Discussions are understood to be continuing over a possible compromise, although neither Dublin City Council nor the promoters behind the concerts were prepared to comment yesterday.

Minister for the Environment Alan Kelly said yesterday he was legally precluded from intervening , but called on all sides to come together in an “atmosphere of calm”.

“If this happens, I would be optimistic that the common good and common sense will prevail as the distance between all parties is not insurmountable,” he said.

Emergency legisation was not an option, he added, on the basis that rushed amendments may not stand up to legal challenge and could jeopardise all the concerts.

“It would only serve to make an already bad situation worse and bring further uncertainty to the situation. I will not be going down this road,” he said.

Separately, he said he will carry out a review of the way major events are handled over the coming months to avoid a repeat of the current controversy.

“This will be progressed in the coming months as opposed to carrying it out in rushed manner that is in neither the interests of concert-goers, residents or the planning system in general,” he said.

Earlier, Tánaiste Joan Burton said there was a “window of possibility” in reaching an agreement over the staging of the Brooks concerts at the end of the month.

Hoping for a miracle 🙏 #letsgo5inarow

The Labour Party leader said there was an indication that some of the residents names used in the objections against granting the licences “were not in fact properly consulted or their names were used without their knowledge”.

Speaking on RTÉ’s The Week in Politics today, Ms Burton said she would like to see the country and western singer come to play his shows in Ireland.

She said she would be asking Minister for the Environment Alan Kelly to have a look at the laws in relation to the licensing of events. “I think it does need to be updated,” she said.

Fans of Brooks took the streets of Dublin on Saturday in protest against the cancellation of his concerts at Croke Park.

About 50 people from across the country marched from the GPO on O’Connell Street to Dublin City Council’s offices.

Chanting “let’s go, five in a row”, they said they were still hopeful the five concerts could go ahead in just over two weeks.

Steven Mangan, a member of the Residents Supporting Croke Park, said those marching yesterday were “die-hard” fans . “People will be devastated if the concerts don’t go ahead. As long as there’s a glimmer of hope we’ll hang onto it,” he said.

Mr Mangan said one protester from Belfast had queued for four days to buy a ticket for the shows.

“Fans feel let down. We’re in limbo but at least there is hope,” he said.

Mr Mangan said he had lived in Croke Park area for almost 40 years and had no objections to any of the concerts at the stadium.

Aiken Promotions applied for the licence for permission for the concerts to go ahead in April.

Dublin City Council received 373 submissions, the majority were objections, in relation to granting the licence.

The council gave licences for the first three concerts from July 25th-July 27th but not for two of the shows.

It said this was due to fears of noise, traffic disruption, illegal parking and “potential antisocial behaviour”.

In response to the decision, Brooks said it would not be fair on the 160,000 fans who bought tickets for the July 28th and July 29th concerts to only play three gigs.

“For us, it is five shows or none at all,” he said. “To choose which shows to do and which shows not to do, would be like asking to choose one child over another. However this plays out, Ireland has my heart and always will”.

Brooks rejected an offer from Dublin City Council on Thursday to play two of the concerts as matinees.

Brooks said he was “shocked” and had been under a “dark cloud” over the cancelled Dublin concerts.

The artist said he was willing to meet Mr Kenny this weekend to find a way of playing the concerts. “If the prime minister himself wants to talk to me, I will crawl, swim,” he said.