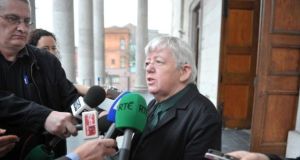 Mary Crilly said three female students from UCC and CIT had contacted them since the start of September to say that they had been raped. File photograph: Dan Linehan/ Irish Examiner

Gardaí in Cork need more resources to investigate sexual assaults and rapes which tend to increase during the early autumn months when third-level colleges re-open, according to a campaigner against sexual violence.

Mary Crilly of the Cork Sexual Violence Centre said three young female students from UCC and CIT had contacted them since the start of September to say that they had been raped. Two of the three had dropped out of their courses to return home to their families.

Ms Crilly said an American study had found that more freshers were sexually assaulted and raped from September to November, when some are attending parties and drinking for the first time.

She said that the Cork Sexual Violence Centre notices a similar increase in young women contacting them when UCC and CIT return but often the young women may not have been drinking and in one of the recent cases, the attack happened in the woman’s own building.

She said that often the young women will not report the matter because they have been drinking and as a consequence blame themselves for the attack and sometimes they will not even tell their families because their parents do not know that they drink.

Ms Crilly was speaking after calling for more resources to be provided to the new Garda Protective Services Unit (PSU) set up in Anglesea Street Garda Station in Cork given that the new unit is charged with investigating sexual assault, child sexual abuse, domestic violence and sex trafficking.

Share your story: Have you experienced sexual assault at third-level?

Chief Supt Barry McPolin had outlined to a Joint Policing Committee how the new PSU was set up initially on a pilot basis in Cork city in September 2016 but was made permanent in May 2017 and it is hoped to have its full complement of two sergeants and 10 detectives in place shortly.

Chief Supt McPolin said crime statistics for the period January - August 2018 showed the number of rapes reported had risen from 23 in the same period in 2017 to 35, marking a 52 per cent increase while the number of sexual assaults fell from 127 to 111 over the same period, a 27 per cent decrease.

He said that the combined figure for rapes and sexual assaults fell by 11 per cent when the two eight month periods were compared. However, Ms Crilly told The Irish Times she believed that the fall was more likely due to a reduction in reporting than a fall in the actual number of incidents.

“We need more staff for the Protective Service Unit or else it is a backward step - a city the size of Cork should have a unit with at least 20 gardaí given they are being asked to investigate historic and current complaints of sexual assault and child sex abuse as well as domestic abuse,” she said.

“Having specialist investigators who have training in dealing with the victims of sexual violence is welcome but we need more of them in this new unit because I have seen cases that have taken over a year to investigate and that’s far too long for the victims to be waiting” she added.

Chief Supt McPolin said that he would naturally like to have more staff for the PSU as there were an increasing number of complaints of sex crimes coming into the unit but it was a matter of balancing resources as he also had to devote officers to front line policing duties which were also important.

“A lot of the new complaints coming into the Protective Service Unit are of a historic nature but it’s encouraging to see that people have the courage and the confidence in us to come forward so we can fully investigate their complaints.”