Man (57) arrested on suspicion of a number of offences 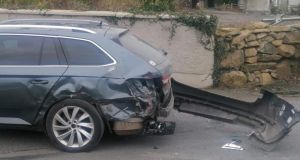 The PSN said that during the operation a Scania HGV tipper lorry ‘deliberately and repeatedly’ rammed the police car as those in the lorry attempted to flee. Photograph: PSNI

Three police officers were injured when their police car was rammed by a lorry in south Armagh on Friday.

It happened during a joint enforcement operation with Her Majesty’s Revenue and Customs (HMRC) officers at a commercial site on Edenappa Road in Jonesborough.

A 57-year-old man was arrested on suspicion of a number of offences including obstruction and fraudulent evasion of duty on fuel.

The Police Service of Northern Ireland (PSNI) said that during the operation a Scania HGV tipper lorry “deliberately and repeatedly” rammed the police car as those in the lorry attempted to flee.

Two police officers received medical treatment at the scene, and a third was taken to hospital as a precaution.

The police car was “significantly damaged.”

Superintendent Norman Haslett said it was an “appalling, reckless, dangerous and completely cowardly act” and “using a heavy goods vehicle as a weapon, could easily have caused catastrophic injury or worse.”

He said an investigation was underway and police were liaising with colleagues in An Garda Síochána.

“We are particularly interested in locating the vehicle and the driver which rammed the police car,” he said.

“It was displaying the number plate LD08 POP and crossed into the Republic of Ireland and will be bearing damage to the front driver’s side.”

He asked anyone with information to contact police in Northern Ireland on 101 quoting reference number 754 of 5/03/21, or online via a reporting form at psni.police.uk/makeareport.