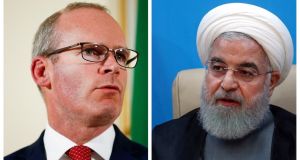 Minister for Foreign Affairs Simon Coveney is travelling to Tehran on Saturday to meet with the Iranian president Hassan Rouhani for discussions on the stalled nuclear deal between Iran and the EU and the countries of the UN Security Council.

The visit, which is related to Ireland’s Security Council role, comes amid signs that the Iran nuclear deal (known as the Joint Comprehensive Plan of Action, or JCPOA), which stalled after it was repudiated by former US president Donald Trump, could be resuscitated under the administration of new US president Joe Biden.

The trip comes days after the Government announced that it will reopen Ireland’s embassy in Tehran and will see Mr Coveney discuss wider Middle East issues with Mr Rouhani and the Iranian foreign minister, Javad Zarif.

But officials said the main focus would be on the stalled nuclear deal. Concluded in 2015 between Iran and the five permanent members of the security council – the US, UK, China, Russia and France – plus Germany and the EU, the deal saw Iran agree to inspections to verify its nuclear programme was purely for peaceful purposes in return for a lifting of sanctions against the country.

The deal stalled in recent years after the US walked away and reimposed sanctions. Though the EU sought to continue to operate the deal, Iran later restarted processes thought to be intended to produce uranium for military use.

However, Mr Biden has indicated his desire to restart the deal and in recent days there have been indications that informal talks could begin next month.

One of Ireland’s roles on the Security Council is as “facilitator” for the resolution, which approved the nuclear deal in 2015, formally known as the Joint Comprehensive Plan of Action.

In a statement issued on Friday night, Mr Coveney said: “Ireland is a strong supporter of the JCPOA. In our role as Facilitator, Ireland is keen to maintain a close dialogue with all actors, and encourage all parties to return to full compliance with the agreement.

“The visit will also be a valuable opportunity to discuss the JCPOA, along with other key issues in the Middle East, many of which feature on the agenda of the Security Council.”