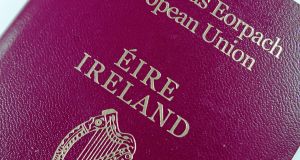 The Department of Foreign Affairs has been criticised for the failure to have staff present in the Passport Office to answer the phone or deal with online queries during Level 5 restrictions.

Fianna Fáil Senator Aidan Davitt said a number of applicants have been waiting months for the return of documentation, which in some cases has been “in the system since October”.

He said parents have to submit their passports when they put in an application for their children and they cannot get their own document returned.

“All their certificates and everything that they supply is caught up in the system. There is no guarantee of return when they look for documentation back,” he said.

Raising the issue in the Seanad he said “many people need passports to open bank accounts, to apply for driving licences, to rent houses and even for matters as simple as getting a television or phone supplier”.

Under Level 5 restrictions the service “paused” processing of routine applications, dealing with emergency, urgent and essential cases only.

This follows the public health guidance that people should work from home during the lockdown.

Mr Davitt said the Passport Service officials should also be considered essential. He pointed out that Britain is also at the highest level of lockdown but is providing “quite a decent level of service” in its passport section.

“The number of people involved is very small” in providing an important service, he said.

It was not like the entire construction industry going back to work or the “large-scale movements involved in opening schools in full”.

The Government Senator said the “excuse” that had been given “is that these employees have to be in the office and that their work is very concentrated”.

He understood the security concerns “but it’s not acceptable that there is no one to answer the phone and that passports cannot be renewed online”.

But Mr Brophy confirmed normal service will only resume “once restrictions are eased”.

Paused applications “are adult renewals that are not required for essential purposes, applications which are complex or require supporting documentation, such as child renewals where the consent of all guardians must be obtained and verified, and first-time applications.

“When there is an essential reason to travel each case will be considered,” he said.

Mr Brophy said Passport Service officials “are confident any backlog will be cleared within six to eight weeks” once restrictions are eased.

Pressed by Mr Davitt about the return of documentation that had been in the system since October, the Minister said: “I cannot comment on an individual case.”