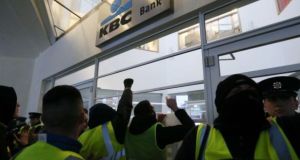 Threats to target homes of bankers and receivers involved in house repossession cases are “completely unacceptable” and “appalling”, the union representing bank employees has said.

The Financial Services Union reacted with alarm to a report that the group behind the attack on security personnel guarding a repossessed house in Roscommon last week has threatened to target bankers’ homes.

The warning marks an escalation in tensions between the banks and protesters arising from the eviction of a Roscommon farming family from a house at Falsk near Strokestown last week. They were evicted by security staff acting on a repossession order for the Belgian-owned KBC Bank Ireland.

In the early hours of last Sunday week, a group of about 20 men stormed the house and attacked the security workers. In the violence, four vans and two cars owned by the security men were burnt out and a dog was fatally injured. A criminal investigation is under way into the incident.

Since the incident, damage was caused to KBC’s head office on Sandwith Street in Dublin city centre last Thursday, while the bank’s branch in Dundrum in south Dublin was attacked on Friday night, followed by an arson attack causing extensive damage to the KBC branch in Swords, north Dublin on Saturday. The bank has 16 Irish branches.

A Sunday Times report quoted one source involved in the group behind last weekend’s vigilante attack in Roscommon as saying the homes of bankers and receivers would be targeted next.

The bank staff’s union called on KBC management to review the roles of all employees working on long-term arrears cases and to look at precautionary measures for staff on home visits and whether they are appropriate in light of the protests against the bank over repossession cases.

“We do understand that there is a lot of public anger out there and while we live in a democracy where there can be protests, the protests should be peaceful,” said Gareth Murphy, acting general secretary of the union.

The union said staff were “extremely upset and stressed” by the protests and called on the bank to take extra security procedures and precautions to ensure no staff are at risk.

Mr Murphy also wrote to KBC Bank Ireland chief executive Wim Verbraeken calling on him to address “some of the public anger and concerns” about how the bank was approaching cases where customers had fallen behind on arrears and on non-performing loans.

A KBC Bank spokesman declined to comment on the latest threat to target staff homes. “As this is the subject of an investigation by An Garda Síochána, we cannot provide comment,” he said.

The number of long-term mortgage arrears cases remain high. Central Bank statistics published last week showed that 27,998 principal dwelling house mortgages were in arrears of more than 720 days at the end of September 2018. This was down by just 199 accounts in three months.

Philip Lane, governor of the Central Bank, wrote in the Sunday Business Post that despite sacrifices by households and companies to reduce debts over the last decade, the stock of non-performing loans were “still too high” and constituted “a national systemic risk in the event of a future downturn.”