Speakers jeered as over 1,200 protest against Roscommon eviction 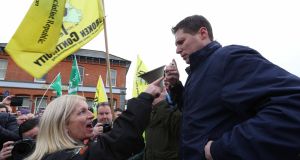 Some speakers were heckled at a protest rally in Strokestown, Co Roscommon, on Sunday attended by more than 1,200 people to highlight their opposition to forced evictions.

Among those jeered was local Fianna Fáil TD Eugene Murphy, who said later he had been told by several local people that they would be staying away from town for the event.

Sinn Féin MEP Matt Carthy, a friend of the McGann family who were recently evicted from their home near Strokestown, was also heckled by a small number of Republican Sinn Féin supporters.

Mr Murphy, whose words were drowned out by booing and chants of “get down”, was followed through the crowd by one heckler who continued to shout abuse after he left the platform.

Local independent councillor Paddy Kilduff, who came to his aid, said the event had been taken over by rival factions.

Many of those attending the rally had come from other parts of the country, although some local people said they were there because they were disgusted by the way the McGann family had been evicted.

On December 11th, farmer Anthony McGann and his siblings were forcibly evicted from their house on foot of a High Court possession order granted to KBC.

In the days that followed, security personnel working for KBC remained in the house. However, they were attacked by vigilantes, a dog was killed and six vehicles owned by the security workers set alight. Members of the family have since returned to the house.

Several speakers called for legislation to ensure the family home can no longer be used as collateral for farm debts.

Independent TD Michael Fitzmaurice said a large number of farms were in difficulty and urged politicians to work together on legislation to regulate security firms and protect family homes. “It is intolerable what is going on at the moment. You cannot put up a family home up as collateral on a farm,” he said.

However, some locals expressed unease at the protest. Two men on their way to Mass said there was a “silent majority” who “did not ask for this protest”.

A woman who was hurrying to get home with her two grandchildren before the rally said locals did not like the way the eviction was carried out “but you have to pay your debts.”