Members of the Irish women's hockey team that won silver in the weekend’s World Cup Final celebrate their return to Ireland with a lot of singing and dancing. Video: Nick Bradshaw & Ronan McGreevy 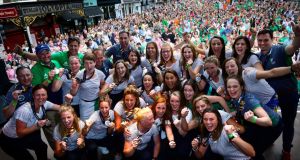 If only Sunday’s World Cup final had been a singing competition and not a hockey match, the medals brought home by the Irish team would have been gold and not silver.

The Irish women danced the conga and began singing as they boarded the plane for home following Sunday’s final defeat to the Netherlands which they lost 6-0.

They didn’t stop when they reached Dublin Airport, nor on the bus into the city centre. By the time the public homecoming moved to Dame Street, there were a few voices frayed at the edges, but they carried on regardless.

This was a joyous and at times, emotional, homecoming. At Dublin Airport many members of the squad cried when the Minister for Sport Shane Ross announced there would be a further €1.5 million funding for Irish teams preparing for the 2020 Toyko Olympics, a substantial portion of which will go to Irish hockey.

Perhaps, the realisation that public thanks went beyond mere platitudes provoked the tears.

They will hold Mr Ross to that promise, though Ireland’s star performer at the championship, goalkeeper Ayeisha McFerran (22), opined that it was the least they deserved.

“We have been asking him for a while for far more funding so that we can get on to that platform that we know we can achieve,” she said.

A crowd estimated at 5,000 turned out to greet the squad in Dame Street. It consisted mostly of young girls and judging by the numbers who cheered when they were asked if they were members of a club, this was predominantly a gathering of the hockey clans.

Proud father and former Ireland rugby international Phillip Matthews, whose daughter Hannah was one of the stalwart Irish performers, enumerated all the ways in which the team surpassed their expectations. “It’s much easier playing that watching it as a spectator let me tell you,” he said. “I’m so proud of all of them.”

Host Des Cahill confessed, that like most of the rest of us, he knew little about hockey before the World Cup tournament in London started, but he did understand one incontrovertible fact: “Irish people love medals. The country fell in love with you.”

Each of the 18 squad members were introduced to the crowd. All had a story to tell. Substitute goalkeeper Grace O’Flanagan is a qualified doctor who often turned up for training in her scrubs after a 24 hour shift.

Midfielder Lizzie Colvin is getting married in October and invited all 17 squad members as bridesmaids. “It’s too late to take it back now,” she joked.

Emily Beatty had glitter in her handbag and was getting ready to cheer on her teammates when she got the call on Sunday morning, five hours before the game, to play in the World Cup final, as you do.

“I got a taxi and said, ‘it’s an emergency, I’m playing in the World Cup final’,” she said.

She replaced Megan Frazer who who had her own tale of woe relating to a series of injuries s to make the tournament.

The homecoming in Dublin ended with a few showstoppers. The squad’s piece is All I Want for Christmas Is You. A Christmas song in the middle of summer, you might ask? Then again a team which reached the World Cup final despite being the second lowest ranked team is capable of anything.

Captain Katie Mullen rated their rendition of the Mariah Carey standard on the morning of the World Cup final as the stand-out moment of their week.

It may explain why the Irish team played with such joy and without fear throughout the tournament.

They squad’s unofficial anthem is the Lighthouse Family’s High which closed the homecoming. Arm in arm and hand in hand they swayed to the music and the crowd swayed along with them.

What highs can surpass this? “We’ll get to the Olympics,” said coach Graham Shaw.

To that end, the extra money will come in handy. The Department of Transport, Tourism and Sport stressed the €1.5 million was not drawn from pre-existing commitments but instead was part of a larger “windfall” of money given to the department that will be allocated to other areas under Mr Ross’s remit.

A spokesman said the €1.5 million would go towards high performance sports in preparation for the 2020 Olympics, but the exact proportion that will be given to women’s hockey has yet to be decided.

However, as Shaw pointed out, the disparity of resources remains massive. He revealed that one of the other teams in the World Cup had a budget of €17 million. That’s what this Irish team continues to be up against.