Sunny spells – but no heatwave – for the bank holiday weekend

Music, comedy and fireworks at the many festivals taking place around the country 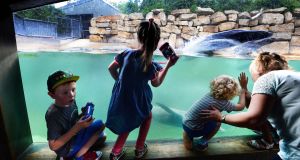 While a heatwave sweeping across mainland Europe will pass Ireland by this bank holiday weekend, Met Éireann have forecast dry weather, with sunny spells throughout Saturday and Sunday.

Temperatures will be slightly above average at 19-21 degrees on Saturday, and up to 23 degrees on Sunday and Monday. Northwestern and northern areas, however, will be cloudier with spots of mist and drizzle.

Despite the milder temperatures compared to the scorching highs of June and early July, there are plenty of events and festivals taking place over the August bank holiday weekend.

In Dublin, the Beatyard festival in Dún Laoghaire harbour features a range of musical acts, including The Jacksons, Little Dragon and Orbital.

The annual Spraoi street festival is taking place in Waterford city with a parade through the city centre, more than 250 live performers, free shows and a fireworks display on the River Suir.

All Together Now, a new music festival on the summer line up, kicked off in Co Waterford on Friday night. The festival has 16 music stages and headline acts include Róisín Murphy, Fleet Foxes and First Aid Kit.

Indiependence festival is taking place in Mitchelstown, Co Cork. Walking on Cars, Jake Bugg, Kate Nash and Le Galaxie are headlining, with a host of other performers and comedy events on show.

Charleville Castle, in Tullamore, Co Offaly is hosting the Castlepalooza Music and Arts Festival. The festival is offering a range of music and comedy acts, including All Tvvins, Rubberbandits, Detroit Swindle, Ships and New Jackson. There will be workshops in breakdance, graffiti, yoga, and DIY facepaint and beard glitter stations.

The Dublin Airport Authority has said almost 422,000 passengers are expected to pass through the airport over the bank holiday weekend.

More than 2,780 flights will arrive and depart from the airport over the four days, expected to be the busiest bank holiday of the year.

“Large numbers are expected to travel through the airport this weekend so we are advising passengers to go directly to security screening once they have checked-in,” a DAA spokeswoman said.

Cork Airport is also expecting a surge in passenger numbers, with more than 44,000 people booked to travel through the airport this weekend.

Irish Water Safety has appealed to the public to take safety precautions while out bathing in seas or waterways. So far this year, 49 people have drowned in Irish waters.

The Road Safety Authority and An Garda Síochána also issued a public appeal earlier in the week to motorcyclists, asking riders to “ease off the throttle” over the bank holiday weekend, when there is often a spike in road incidents.

Last year there were 15 serious collisions recorded on Irish roads, resulting in three deaths, over the August bank holiday, and overall 20 motorcyclists were killed on the roads last year.