Thousands of nurses to get €2,200 payment backdated 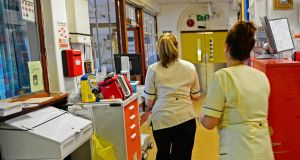 The original cost of the Labour Court recommendation to end the nurses’ dispute was to be offset by altering terms for new entrants, reducing agency staff and enhancing productivity. File photograph: The Irish Times

In the weeks ahead between 4,000 and 5,000 nurses in acute hospitals are to receive an additional allowance worth more than €2,200 with the payment backdated almost 12 months.

Payment of the location allowance to nurses working in medical and surgical wards in acute hospitals formed part of the agreement that ended the strike by members of the Irish Nurses and Midwives Organisation (INMO) early last year.

Implementation of this allowance to nurses in about 300 medical and surgical wards in hospitals countrywide has been delayed since the deal was agreed. However, the Health Service Executive said a circular to hospitals and hospital groups authorising the payment would issue “in the coming days”.

The HSE declined to say how much the initiative would cost, specifically, or how many additional nurses would benefit.It said the payment would have “an applicable date of the 1st of March 2019”.

The INMO estimated on Thursday that about 4,000 to 5,000 nurses working in medical and surgical wards would receive the allowance, worth €2,230 per year, for the first time under the agreement.

The cost of the deal that ended the strike last year is running millions of euro ahead Government estimates. In February, the Government said implementation of the Labour Court’s recommendation would cost €10 million to €15 million in 2019 and €30 million to €35 million in 2020 after productivity and savings initiatives were taken into account.

The Department of Public Expenditure said last week that implementation of the agreement cost €29.7 million last year. It estimated the cost in 2020 would be €67.1 million. However, the department said this did not include an additional €13 million cost last year of implementing separate recommendations advanced by the Public Service Pay Commission, largely increases in allowances for nurses.

The bill for implementing the commission’s recommendations is estimated at €26.8 million in 2020.

What savings have been booked?

The original cost of the Labour Court recommendation to end the nurses’ dispute was to be offset by altering terms for new entrants, reducing the use of agency staff and enhancing productivity.

The Government has not revealed any details on savings achieved since the deal was put in place. Neither has it published targets for savings it expects to generate this year.

The department said last week that as applications for the new nurses’ contract, provided for under the settlement agreement, opened only on August 23rd, 2019, it was “too early to say what productivity or savings impacts have or will arise from this measure. The Labour Court recommendation states that the parties to the agreement will reconvene to examine it in the event of failure to realise the envisaged savings.”

The department said before Christmas that a verification exercise to review savings generated under the deal,originally scheduled by the end of 2019, would now be completed by the end of the second quarter of this year.