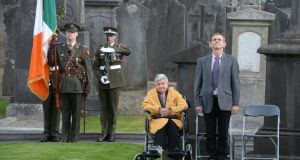 Eileen Quinn, Thomas Ashe’s niece, with her son Gregory Quinn at the State commemoration in Glasnevin Cemetery to mark the centenary of his death. Photograph: Alan Betson/The Irish Times 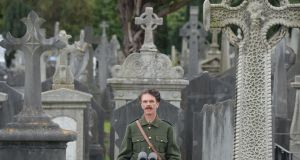 Declan McCarthy recites a poem while dressed as an Irish Volunteer during the State commemoration in Glasnevin Cemetery to mark the centenary of the death of Thomas Ashe. Photograph: Alan Betson/The Irish Times

The graves of Jeremiah O’Donovan Rossa and Thomas Ashe lie back-to-back in the republican plot at Glasnevin Cemetery.

Their deaths, the former in August 1915, the latter in September 1917, bookended the tumult of the Easter Rising.

Ashe (32) died in the Mater hospital on September 25th, 1917. He had been on hunger strike with other republican prisoners in Mountjoy Jail. The prisoners had demanded political status, a demand that would resonate 64 years later during the hunger strikes of 1981.

Ashe was the victim of a barbaric prison regime. An inquest jury, not chosen for its republican sympathies, concluded that Ashe’s death was caused by the “punishment of taking away from his cell his bed, bedding and boots, and being left to lie on the cold floor for 50 hours and then being subjected to forcible feeding in his weak condition, after a hunger strike of five or six days”.

The funerals of both men had a galvanising influence on the republican movement.

In echoes of Patrick Pearse’s famous speech at the grave of O’Donovan Rossa, Michael Collins’s oration at Ashe’s graveside was pithy and pointed: “That volley which we have heard is the only speech which it is proper to make above the grave of a dead Fenian.”

However, it was Ashe’s multifaceted life and not his death that dominated the State centenary commemoration for him at Glasnevin Cemetery on Friday, which was organised by the Department of Culture, Heritage and the Gaeltacht.

Ashe was a musician, the founder of the Black Raven Pipe Band, a native Irish speaker from the Kerry Gaeltacht, an inspirational teacher, a GAA man, a founding member of the Irish Volunteers and president of the supreme council of the Irish Republican Brotherhood.

At Friday’s event, Glasnevin Trust chairman John Green said Ashe’s funeral matched O’Donovan Rossa’s in size and impact, but he suggested it would be a “travesty” if the only thing to be remembered about Ashe was the circumstances of his death.

During the Easter Rising, Ashe had been “spectacularly successful” during the Battle of Ashbourne, Mr Green said, which would provide the template for the IRA’s activities during the War of Independence.

The letter of recommendation from the parish priest in Dingle which secured Ashe a job as principal of Corduff National School in Lusk, Co Dublin, in 1908 was read out by a pupil from the school, Sinéad Rafferty, including the line: “I don’t think you are likely to find within the four seas of Ireland a finer type of Gael.”

The chief guest at the commemoration was Ashe’s niece Eileen Quinn, who read a poem as Gaeilge. The actor Declan McCarthy also read from Ashe’s poem Let Me Carry Your Cross for Ireland, Lord, which was written in the months before his death.

“Let me carry your cross for Ireland, Lord/The hour of her trial draws near/And the pangs and the pains of the sacrifice/May be borne by comrades dear.”

Wreaths were laid by the Minister for Culture, Heritage and the Gaeltacht Heather Humphreys on behalf of the Government.

There will be a separate ceremony for pupils and staff at Corduff National School on Monday, which is the exact centenary of Ashe’s death.