Two inquiries under way into release of odourless gas at Corrib

€400,000 worth of gas burned off and safe supply restored to some customers 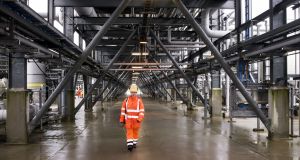 Two State investigations are under way into the release of odourless gas into the natural gas supply in the west of Ireland after a “technical fault” at the Corrib gas refinery.

More than 9,000 customers in counties Galway and Mayo were advised to shut down supplies on Thursday until further notice for safety reasons, and the State’s national gas emergency plan was invoked.

Gas Networks Ireland said it had restored a safe supply to 60 per cent of those affected by Friday evening, mainly in Galway city and parts of the county.

Separate inquiries by the Commission for Energy Regulation and the Environmental Protection Agency are under way, while Shell E&P Ireland has also confirmed it is undertaking an internal investigation.

Flaring of the odourless gas to remove it from the system continued throughout Friday at the refinery in north Mayo, with a 15m flame visible and audible for several miles.

“Once again the community bears the brunt of very intense flaring, which is a form of atmospheric pollution,” she said.

It is estimated that up to €400,000 worth of fuel – equivalent to a fifth of the national daily demand – had to be pushed back through the system and burned off at the refinery.

The EPA has confirmed that the flaring has reduced pressure and is expected to be completed on Friday night.

Natural gas is odour-free when extracted, and a chemical including sulphur is normally added at refining stage to allow leaks to be detected.

Gas Networks Ireland said its primary objective was to “restore gas to all affected customers in the Galway and Mayo regions as quickly as possible, while ensuring at all times that safety is our first priority”.

Minister for Energy Denis Naughten said he supported a call by Minister for Rural and Community Development Michael Ring for a thorough inquiry.

A spokeswoman for Mr Naughten said he would receive a report early next week from the Commission for Energy Regulation, and was receiving regular reports from the gas emergency response team, which had met on a number of occasions over the past two days.

The emergency response team is part of the national gas emergency plan,established under the Gas (Interim) (Regulations) Act 2002, and comprises representatives from Mr Naughten’s department, the Commission for Energy Regulation, Gas Networks Ireland and Eirgrid.

Mr Naughten’s spokeswoman said there were no security supply issues.

Mr Ring had said that while the priority was to restore safe supply, answers were required “without delay”.

Mr Ring, who had supported calls for a refinery offshore as a Mayo TD, said that “we were given guarantees that this type of thing couldn’t happen”.

“Companies that sell potentially dangerous energy products to our consumers have an obligation to ensure that there is no risk to the customer,” Mr Ring said. “The fact that this has not happened is of the utmost concern.”

Shell to Sea described it as a “fiasco” and said it “highlighted the lack of regulation and monitoring of Shell in relation to the Corrib gas project”.

Gas Networks Ireland said new information on resumption of gas to affected areas would be “advised as soon as available”, and advised customers to ensure all appliances are switched off prior to turning the gas supply on again.

It said further instructions on how to do this are available on www.gasnetworks.ie.