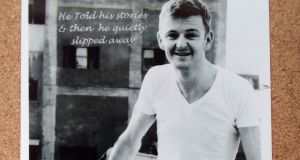 Photograph of John ‘Jackie’ Fricker taken in his youth on board a ship. Photograph: The Fricker family

More than half a century after a wildlife biologist in Alaska discovered a message in a bottle buried in the sand, the mystery of the man who threw it into the Pacific Ocean has been solved.

In the winter of 1964, Michael Perensovich, who was based in the city of Juneau in Alaska, discovered a small glass bottle on the shores of the Yakutat region of Alaska while on a field trip counting moose in the area.

Inside the bottle was a piece of brown paper with a name and address clearly printed in black marker.

A year after discovering the bottle, Mr Perensovich, who will turn 92 later this year, wrote a letter to the address in Dublin but never heard back. “He wrote to the address a couple of times but never heard anything,” his granddaughter told The Irish Times. “He’s always told people about it and if ever you go over to the house he says ‘hey, did I show you my message in the bottle?’”

More than 50 years after the discovery, Mr Perensovich’s granddaughter, Kari, arrived in Ireland this week hoping to track down the Fricker family.

“It’s in a glass case and he hadn’t talked about it in a long time. When I said I was going to try and follow it up he got really excited.”

The Irish Times had a look too, and following a visit to the address on Sarsfield Road, discovered John “Jackie” Fricker had died in 2013.

One of 10 children, Fricker trained as a chef in Paris before backpacking with friends across Europe. He then began working as a chef on board Irish Shipping cargo ships which brought him to the Pacific Ocean. A copy of the Irish Ships Signal newsletter from December 1963 confirms there was a cook on board the Irish Rowan cargo ship.

“He was a world class chef and when he wanted to change ships the crew would double his wages to get him to stay,” recalls Gerry Fricker, Jackie’s younger brother who still lives close to the family home.

“He was a really nice guy but he had a fiery temper. To meet him he was very gentle speaking. He travelled all over Europe working in hotels, he had a great life.”

Jackie never married or had children but “he had a little shop over on the north side of town, a little grocery shop where he made his own bread,” said his brother. “He also did house painting and he loved a bit of gardening himself.”

Gerry Fricker, who briefly worked on an oil tanker in the Irish sea, said it was quite common for seamen to drop bottles with messages into the sea. However, most people quickly forgot about the messages and moved on, he said.

“It’s really intriguing after all this time that this has happened. It’s like magic. We finally have a conclusion so to speak.”

A first cousin of the Fricker brothers is Oscar-winning actor Brenda Fricker. A common ancestor is John Frickers , who was born in about 1874, according to census records. By 1901, he was working as a newspaper reader in The Irish Times and living with his parents, retired clerk William Henry and his wife, Sarah.

Among his children were Maurice, father of Jackie and Gerry; and Desmond, a public relations officer for the department of agriculture whose children included Brenda Fricker who won the Academy Award for Best Supporting Actress in 1990 for her performance in My Left Foot.

Kari, who has yet to meet the Fricker family, said she was shocked to discover Jackie’s siblings still lived in Dublin and were willing to meet her.

“I was honestly just expecting to take a selfie in front of the address so I’d have a picture to show my grandpa. This is above and beyond anything I believed could happen. It’s an unexpected but very pleasant surprise.

“This won’t just make my grandpa’s day, it will make his life.”