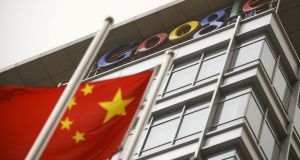 The former Google China headquarters in Beijing in 2010. The internet giant is returning to the Chinese market, US media reports say. Photograph: Liu Jin/AFP/Getty Images

Google is working on plans to launch a version of its search engine in China that will block controversial search terms and some websites, according to media reports, eight years after it left the market over censorship.

Investigative news site The Intercept cited internal documents and people familiar with the plans saying Google had been working on a project code-named “Dragonfly” since the spring of last year.

There was fresh impetus behind the plan following a meeting between Google’s chief executive Sundar Pichai and a top Chinese government official, The Intercept said. Among the censored terms would be reference to dissent, human rights, democracy and religion, similar to the blacklisted searches on domestic Chinese search engines such as market leader Baidu.

The Great Firewall, as China’s elaborate system of internet controls is known, is ostensibly used to control violent and pornographic content, but it is also used to stymie any forms of online dissent.

Search terms related to the 1989 crackdown on the Tiananmen Square protests, the Tibetan spiritual leader the Dalai Lama or other sensitive issues are blocked.

Google ran a censored version of its search engine between 2006 and 2010 but then decided to leave the Chinese market as it came in for heavy criticism from human rights groups, which said it contradicted the group’s “don’t be evil” policy.

In recent months, Google has been more active in China, setting up an artificial intelligence (AI) research facility in Beijing late last year and launching a game platform on WeChat, the Chinese messaging and social media platform.

There was a cautious welcome to the news online, although there were questions about what the difference would be between a “castrated” version of Google and the current market leading search platform, Baidu.

“I support the idea of Google in China, although it is castrated. It’s better than Baidu’s monopoly,” a user called Wang Sir wrote on the Sina Weibo social network.

Patrick Poon, China researcher at Amnesty International, said it would be “a dark day for internet freedom if Google has acquiesced to China’s extreme censorship rules to gain market access”.