Women and immigrants target of recruitment across Army, Air Corps and Naval Service 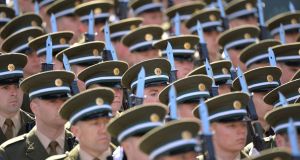 Members of the Defence Forces pass the GPO during the ceremony commemorating the 100th anniversary of the Easter Rising 1916 on O’Connell Street. File photograph: Alan Betson/The Irish Times

The Defence Forces have launched a drive to recruit 860 personnel this year, with an emphasis on attracting more applications from women and immigrants.

The recruitment drive is the biggest on record, an increase of 170 on the 690 new recruits drafted into the Forces last year.

The drive, which will provide opportunities across the Army, Air Corps and Naval Service, is aimed at keeping the Defences Forces at a full strength of 9,500 personnel. Those recruited will include general service recruits, apprentices and cadets.

Minister of State with responsibility for defence Paul Kehoe said the Government was committed to encouraging more young women to join the forces.

The Government has committed to nearly doubling the number of women in the Defence Forces from 6.5 per cent to 12 per cent over the next five years.

A gender adviser has been appointed by the Defence Forces to promote equality policies and training within the organisation.

“I would also urge our new Irish, who have contributed so much to the creation of a more pluralist and culturally diverse Irish society, to take up the opportunity to serve in the armed forces of the State they now call home,” Mr Kehoe said.

“The Defence Forces welcomes and respects all, irrespective of gender, creed, ethnicity or sexual orientation,” he added.

“It is vital that we continue to recruit young men and women to both maintain the strength level and military capability and to ensure fresh thinking. I would encourage any young person who is currently thinking about his or her future career to consider the opportunities available in the Defence Forces.”

The first of these competition streams, general enlistment, is now open on the Defence Forces website at military.ie